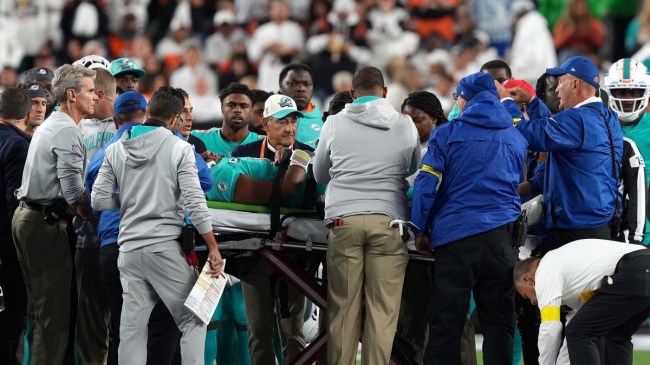 By now we’ve all heard about the Tua Tagovaila head injury saga that began in the Miami Dolphins’ week 4 win against the Buffalo Bills. No one could believe he returned to play, but he was ultimately cleared and did so.

Then, in the Dolphins’ Thursday night loss to the Bengals, Tua was hit hard and left the game with what appeared to be a serious head injury. Tua was diagnosed with a concussion and flew home with his team Thursday night.

But, after the week 3 injury, the NFLPA initiated an investigation into how exactly Tagovailoa was let back on the field. We now have some action that has come out of that investigation.

The doctor who evaluated Tua has been fired by the NFLPA

At every NFL game are doctors independent from each team that are there to evaluate potential head injuries. The doctor that evalued Tua has now been fired.

Cameron Wolfe of NFL Network had it first.

Sideline UNCs are assigned by the NFL Head, Neck and Spine Committee and approved by the NFL Chief Medical Officer and the NFLPA Medical Director. The responsibility for diagnosis of concussion and return to play remains exclusively within the judgment of the team physician.

I’m not so sure why the doctor was so surprised that there was an investigation here. I know that he is qualified to make determinations on head injuries. But, It’s the talk of the entire sports world. Of course, the questions are going to be to be tough.

Guy is the target of the entire NFL world rn and they’re appalled that he’s a little hostile about it?

Some don’t believe that it’s that simple and the blame isn’t just on the NFLPA doctor.

I’m sure more details will come out, and they need to. It’s football and injuries happen, but what happened to Tua Tagovailoa was a travesty.