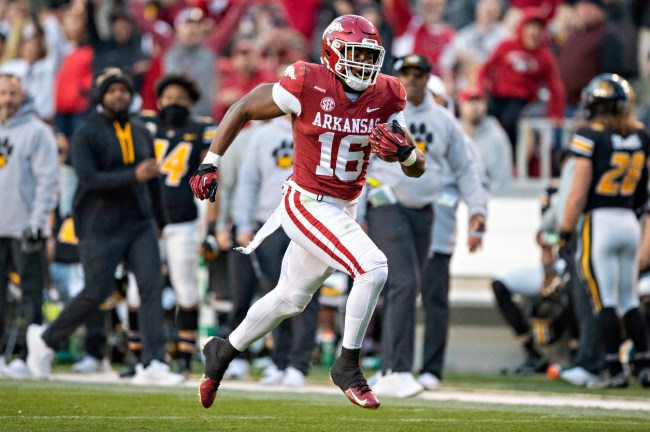 The Tennessee Titans are beginning a new era of wide receivers after trading away A.J. Brown to the Philadelphia Eagles. The Titans then selected Treylon Burks in the first round of the 2022 NFL Draft and nabbed quarterback Malik Willis later on, forming their new QB-WR duo of the future.

However, the latest report on Burks, a standout at Arkansas, isn’t as promising as many expected (h/t Joe Rexrode of The Athletic).

In fact, at this point, Burks realistically projects as WR3 to start, because Nick Westbrook-Ikhine continues to make strides as a playmaker. Burks has had to bail out of some work this spring and has been held out of some things, and wide receivers coach Rob Moore recently confirmed he has asthma. Mike Vrabel said that shouldn’t be an issue, but Burks clearly isn’t in top shape, and it may take him some time to become a major producer.

That doesn’t sound promising whatsoever, and Burks slotting in at No. 3 behind newly-acquired Robert Woods and Nick Westbrook-Ikhine is not what everybody expected.

However, we have seen this situation before.

The most notable time was with Minnesota Vikings star WR Justin Jefferson. Do you remember?

NFL fans and fantasy football players remember that situation before Jefferson exploded on the scene in his rookie campaign.

Or when Ja’Marr Chase couldn’t catch?

Or when Terrace Marshall was the steal of the draft and a no-doubt superstar? https://t.co/fAN2xiDYmN

I'm having "Bisi Johnson is ahead of Justin Jefferson" flashbacks 🤣 https://t.co/Vd6UCaF5Ws

Same was said about Ja'Marr and Justin https://t.co/gbGJTW7GzU

I remember when Justin Jefferson was behind Olabisi Johnson. https://t.co/vrTDRg4esc

The point is, we have seen this before. Jefferson exploded in his rookie season, and Ja’Marr Chase and his preseason drops were another story, and Chase had a magical rookie year as well.

So, set this aside and wait and see how Burks does.