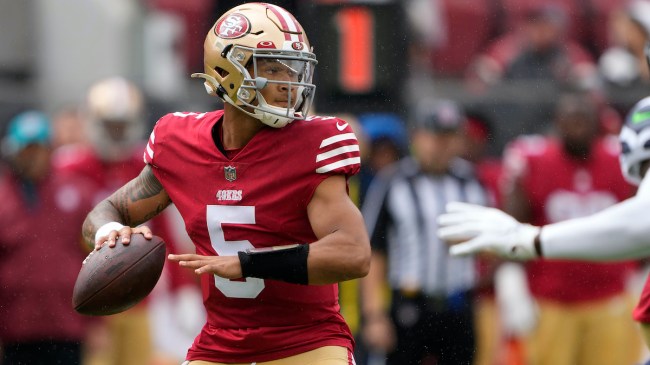 Following a rough performance in the treacherous conditions of Soldier Field last week, the 49ers were hoping for their young QB to break out against the Seattle Seahawks. Unfortunately, Lance was barely able to showcase anything before going down late in the 1st quarter.

On 2nd & 8 in Seahawks territory, Lance takes off on a zone-read play before being awkwardly landed on. He remains on the ground in clear pain and replays revealed a gruesome injury to his right ankle, which appears twisted in the wrong direction.

Trey Lance is getting carted off now. Jimmy Garoppolo is in.

Both the Seahawks and 49ers gathered around to offer their condolences to the injured QB as he was carted off the field. Lance’s right leg was put in an air cast and he was later ruled out for the remainder of the game.

Jimmy Garoppolo, who was made the highest-paid backup QB by the Niners, entered the game as the replacement.

The injury looked awful at the time and it’s now confirmed to be quite serious with a broken ankle. Head coach Kyle Shanahan reported that the young QB will undergo season-ending surgery on Monday. It’s heartbreaking news for the 49ers and Trey Lance.

It’s never good seeing a quarterback go down with an injury, especially when it happens so early in one’s career. Sunday’s game only marked Lance’s 4th start with the 49ers and it’ll be some time until his next.

With Lance now expected to miss the remainder of the season, the NFL world offered up their prayers for him.

It didn’t matter who fans supported. 49ers, Seahawks, and even Lions fans were wishing Lance a speedy recovery.

Heartbreaking even from a Lions fan

It’s truly heartbreaking stuff. All signs pointed toward it being a pivotal year for Lance. The season would’ve provided him with valuable experience. Instead, there’s now a long road of recovery ahead.

Beyond Heartbroken for Trey Lance.
The only way for him to develop is to play and now he looks to have a long recovery ahead of him with his ankle injury. Prayers up for a full recovery 🙏🏾

Hate to see that happen to Trey Lance. I still believe in you, young man. Here's to a speedy recovery.

The 49ers went on to defeat the Seahawks 27-7 with Jimmy G under center. However, losing Trey Lance for the entire season put a damper on things.

Lance will undergo surgery on Monday and a timetable for his recovery will likely come after that. Hopefully, it’s a speedy recovery!