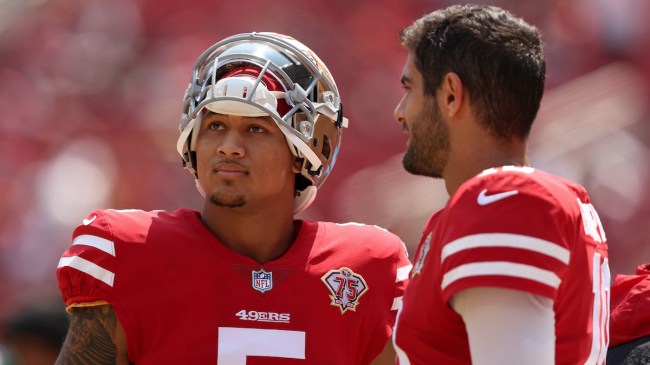 The San Francisco 49ers ended all the off-season speculation when they restructured Jimmy G’s contract in late August. However, it appears the news wasn’t well received by everyone initially—including new starter Trey Lance.

The 49ers’ plan at the beginning of the off-season was clear: Lance in and Garoppolo out. But it didn’t go as expected with Garoppolo needing shoulder surgery in March. The 49ers then surprisingly made him the highest-paid backup QB after failing to find a suitable trade partner.

The decision was met with mixed reactions as fans debated whether the 49ers’ lacked faith in their new starter. According to Albert Breer of Sports Illustrated, even Lance wasn’t thrilled to learn that Garoppolo would remain with the team.

#49ers QB Trey Lance "was a little annoyed in the immediate aftermath" of Jimmy Garoppolo restructuring his contract to remain with the team, per @SI pic.twitter.com/lyYXS6CA68

Despite head coach Kyle Shanahan claiming his new starter was receptive to the news of Garoppolo’s restructured deal, Breer’s comments seem to suggest otherwise—initially at least.

“And while I heard Lance was a little annoyed in the immediate aftermath, he’s a smart mature kid who I believe can handle it. Truth is, if he couldn’t, you might have bigger questions about where the Niners are at the position.”

After all the support shown towards Lance, signing the former starter sends a very different message. With so much still unproven in regard to Lance’s abilities, bringing back Jimmy G only casts more doubt too. So why wouldn’t Lance be annoyed?

The rumor of Lance’s reaction quickly spread because, of course, the internet loves quarterback drama. Breer later clarified his comments by explaining how the reaction was actually pretty natural for Lance.

Sr. NFL Reporter Albert Breer @theMMQB with @sportslarryk and Lo on how Trey took news of Jimmy back.

"From what I understand Trey's reaction was natural. I think it's complicated news for him to take. In the immediate aftermath, you're probably processing a lot of things."

Given the context of the situation, Lance’s reaction is completely understandable. The Niners seemingly put in every effort to solidify him as their starter moving forward, only to end up bringing Garoppolo back.

However, people are likely making it out to be a bigger deal than it actually is. While Lance was naturally taken aback by the news, Breer explains that the 49ers maintained clear communication with all parties during the process.

“No, I don’t think it was easy news for Trey Lance to take. I think it’s something, if you’re him, you ask a lot of questions about. But I think in the end, because the Niners did get in front of it, and were pretty clear in communicating to all the guys what the plan was here, I think they’ll wind up being fine in the long run.”

He went on to edit his report, replacing the note about Lance being “a little annoyed” with “a little complicated for Lance to take at first.” It’s only natural for him to feel that way after all.

The 49ers begin the 2022 NFL season on Sunday, September 11th against the Chicago Bears. And yet, the speculation about QB drama is already here.

Luckily for 49ers fans, it appears their QBs aren’t actually on bad terms. However, until Trey Lance proves his worth on the field or Jimmy G is traded or made a starter again, fans can expect the rumors to keep coming.