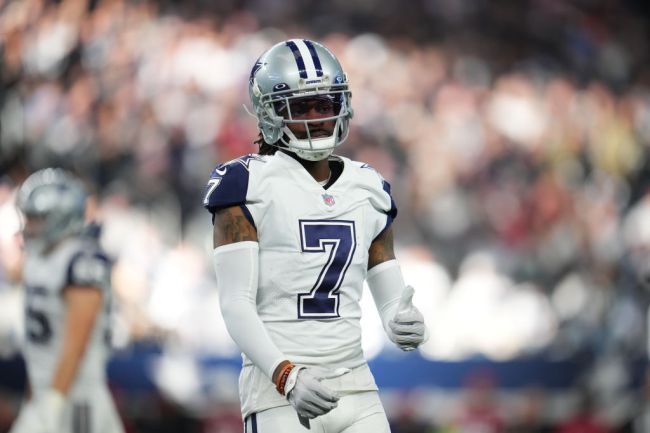 Dallas Cowboys’ Trevon Diggs hasn’t had the easiest of starts to the NFL preseason this year. It seems as though every play the cornerback is involved in happens to go viral and it was no different on Thursday during a joint practice with the LA Chargers.

The Diggs slander reached new heights during the Cowboys’ training camp earlier this month. Unfortunately for Diggs, clips of him getting toasted by CeeDee Lamb and Simi Fehoko on back-to-back plays went viral. Fans were having a field day and it got so bad that Diggs even deleted his Twitter account.

It seems not even that has stopped fans from taking their shots at the Cowboys cornerback. On Thursday, the Chargers posted a video from joint practice and Diggs was under fire once again. The video was meant to highlight the blossoming Herbert-Allen connection, but all fans could see was Trevon Diggs giving up a touchdown.

Countless cornerbacks have struggled against Keenan Allen, but fans were expecting more out of Diggs. He never sees the ball coming and it’s not like Allen pulled some filthy move either. His attempts to block the passing lane came too late and fans jumped on the opportunity to clown him.

Trevon Diggs doing whatever it takes to not get bashed on the internet again 💀pic.twitter.com/hp54H5Xu16

However, not everyone believed Diggs deserved such a hard time. Instead, they praised Herbert’s throw and Allen’s ability to conceal the pass until the last moment.

Wooow. Great throw but even better LATE hands from K. Allen. He knows the only way Diggs knows the 🏈 is coming is Allen’s eyes or hands showing. 13 gave em neither until it was too late. 🔥 https://t.co/P6xSkoDeO9

It’s only the preseason, but the Diggs slander just keeps coming. Even when it’s not his fault, fans can’t help but roast him. With the days counting down until the NFL season, it’s probably only going to get worse. At least, he’s no longer on Twitter to see it happen.