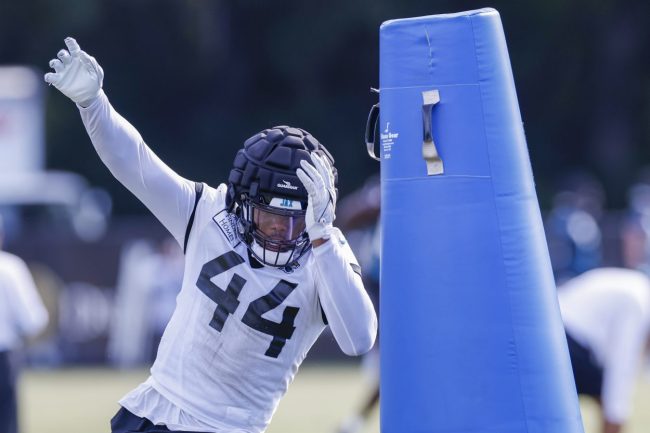 The Jacksonville Jaguars faced a ton of scrutiny over selecting Georgia defensive end Travon Walker with the first pick in the 2022 NFL Draft. Sure, Walker’s measurables are off the charts. At 6-foot-5, 272 pounds, he ran a 4.51 40-yard dash, posted a 35.5-inch vertical and broad jumped 10-foot-3-inches.

But Walker’s production didn’t match the physical traits in college. He had just sick sacks in 13 games for the national title winning Bulldogs in 2021 and 9.5 in 29 career college games. On the other hand, Michigan defensive end Aidan Hutchinson was seen as more of a slam dunk. Hutchinson’s comes in at 6-foot-7, 260 pounds and ran a 4.74 40 with a 36-inch vertical and 9-foot-9 broad. Unlike Walker, he was extremely productive on the field with 14 sacks in 14 games as senior in 2021.

Now all that talk appears to have gone out the window.

Walker made his NFL debut in the Hall of Fame game against the Las Vegas Raiders on Thursday night and left everybody watching in awe.

Safe to say @Movethesticks is a BIG fan of Travon Walker's (@44Ytw) debut 💪 (via @NFLTotalAccess) pic.twitter.com/5XIQTKHeY7

No. 1 overall pick Travon Walker gets his first NFL sack 😤

Welcome to the league big fella

This is absolutely ridiculous . A great power/strength move by the No. 1 overall pick and National Champion Travon Walker and he’s flagged for making eye contact with the quarterback.
pic.twitter.com/IAnPRiThz0

Walker showed off his incredible mix of power and speed throughout his abbreviated appearance. He caused the Raiders headaches almost every snap and picked up his first career (preseason) sack in the opening quarter.

Yeah, I’ve seen enough of Travon Walker. Keep him loose for the regular season, but put the dude in bubble wrap.

Walker’s final stat line showed just one tackle and one sack in his one half of play. But his constant presence in the Las Vegas backfield was impossible to miss. Walker left the game following the halftime break for safety measures.

Football, Mark Davis, and wings.
It's a match made in heaven. 😂 #FootballIsBackhttps://t.co/scOMRdC2yW

Who knows, maybe new Jags head coach Doug Pederson knows what he’s doing? The Super Bowl ring on his finger certainly indicates that he may.