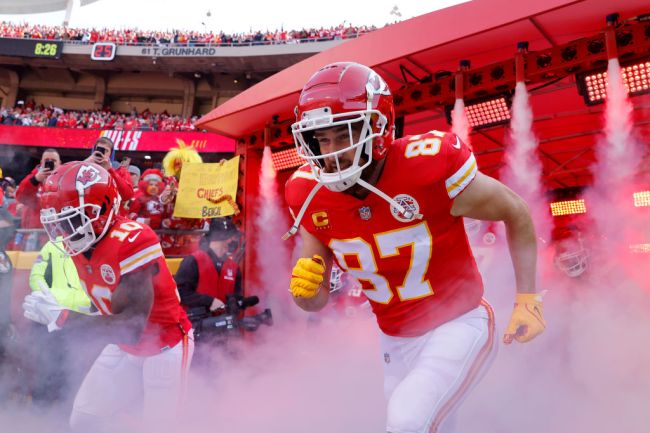 Kansas City Chiefs tight end Travis Kelce is, without a doubt, one of the best in the game. And should his plans go accordingly, fans won’t see him leaving Arrowhead Stadium anytime soon, if ever.

Since being drafted in 2013, Kelce has built quite the resume with 7 Pro Bowl appearances, 3 first-team All-Pro selections, and 1 Super Bowl ring. Now a go-to target for Patrick Mahomes, the 9-year veteran holds the NFL record for most receiving yards by a tight end in a single season (1,416).

Coming off his sixth consecutive season of over 1,000 yards receiving, another NFL record for tight ends, Kelce’s contract was restructured to pay him more money in 2022. It appears the love is mutual from the star tight end as well.

After the offseason saw star wide receiver Tyreek Hill traded away, Chiefs fans were treated to some reassuring words on Monday morning. Kelce spoke to the press and made it clear that he plans on being a Kansas City Chief for life.

Travis Kelce on his legacy in Kansas City: “I don’t plan on playing anywhere else, man. I hope the Chiefs feel the same way.”

Travis Kelce is currently under contract with the Kansas City Chiefs through the end of the 2025 NFL season. Come 2026, the team can easily keep him for the rest of his career if they so choose. Kelce will sure hope so.

With Hill traded away to the Dolphins, Kelce will likely have an even larger receiving role in the coming years. In preparation, the Chiefs’ tight end has attended all of the team’s voluntary workouts so far this offseason.

With his brother in the news for trolling the NFL’s Guardian Caps, Travis Kelce also shared his own thoughts on the new league-wide mandate. To keep it simple, he’s not a fan of the new “mushroom helmets.”

Travis Kelce: “I think the guardian caps are silly.” — mentions it just adds a little extra weight on their head.

“I think we’re just out here wearing mushroom helmets that are doing nothing but just adding weight to our heads,” Kelce explained. “So hopefully we can get rid of those so we don’t have to wear them again.”

With an increasing focus on player safety, it’s unlikely the NFL will do away with the Guardian Caps anytime soon. So for the foreseeable future, Kelce will have to deal with the extra weight. At least the new safety equipment will help extend his career by reducing head injuries. And Chiefs fans will surely appreciate that.