Travis Etienne Is Aiming To Become The Next Deebo Samuel 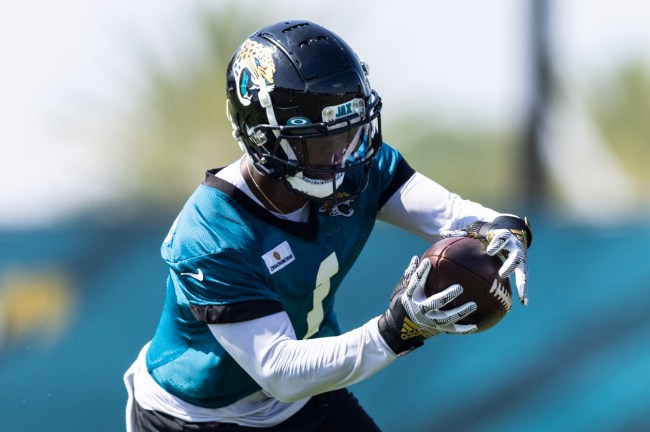 Travis Etienne is making his way back from a Lisfranc injury that prevented him from playing in his first season in the NFL. The former Clemson standout is making terrific progress and has been garnering a ton of buzz heading into the 2022 season.

Etienne has his eyes set on a big role in the new-look Jacksonville offense with Doug Pederson running the show in Florida, and Etienne expressed his desire to be the next Deebo Samuel (h/t Josh Alper of Pro Football Talk).

“Football is all about matchups so I mean if I could be like Deebo Samuel, I would love that.”

Everybody would love that, Travis.

Travis Etienne has all of the tools to become Deebo Samuel 2.0

The Jaguars’ young running back was a standout player with Clemson and the college teammate of quarterback Trevor Lawrence. Big things were in store for his rookie season, although it might have been better off since Urban Meyer caused a trainwreck of a season.

Etienne’s college tape speaks for itself.

The Jaguars accompany No. 1 pick Trevor Lawrence with his teammate, RB Travis Etienne, at No. 25 🔥 #NFLDraft pic.twitter.com/ahTZuiPdZW

The NFL is a different beast, obviously, but Etienne has the skills to become a star with the Jaguars. With James Robinson on the shelf and the Jaguars needing some sort of running game, there is a strong possibility that Etienne steps in and plays a Deebo Samuel role in 2022 and beyond.

Etienne is aiming high, but it sure isn’t too farfetched.