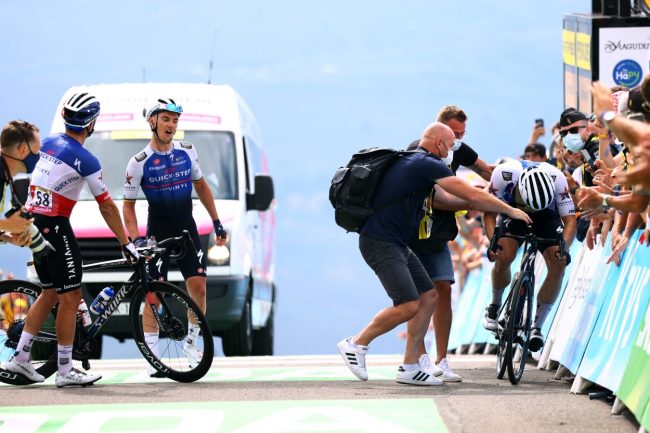 The 2022 edition of the Tour de France has been one of the best in recent history. Last year’s runner-up Jonas Vingegaard of Denmark leads two-time defending champ Tadej Pogacar of Slovenia by just over two minutes with only four stages remaining.

The battle between the two has been incredible. But it’s not the only storyline. We’ve also had incredible sprint finishes, hilarious blunders, and a climate protest that stopped the race in its tracks.

Pogacar and Vingegaard battled for the win again on Wednesday’s stage 17, with the former taking the victory. But it’s what happened at the very back at the race that was most incredible.

Fabio Jakobsen in a Dutch sprinter for Belgian team Quick-step Alpha Vinyl. Just two years ago, Jakobsen was in a coma and fighting for his life after a horrific crash. He since returned and is racing in his first-ever Tour de France. Jakobsen took his first stage win at the Tour on stage two.

But on Wednesday’s mountainous stage 17, he was dead last in the pack and trying to avoid elimination. Jakobsen, who like most sprinters struggles to climb, was just ahead of the cut line. The broom wagon, a van that following riders like the grim reaper, was just seconds behind him as the finish line neared.

Then, Jakobsen did this.

With his team rooting him on and the seconds ticking down ominously, Jakobsen hauled himself up the brutal Peyragudes climb to just avoid elimination with just four stages remaining.

He immediately collapsed once he crossed the line. But cycling fans across the world were in awe of courage.

Jakobsen now has to recover before another brutal mountain stage on Thursday. But if he can survive that, he’ll have a good chance to race for a famous stage victory Sunday on the Champs Elysees in Paris.