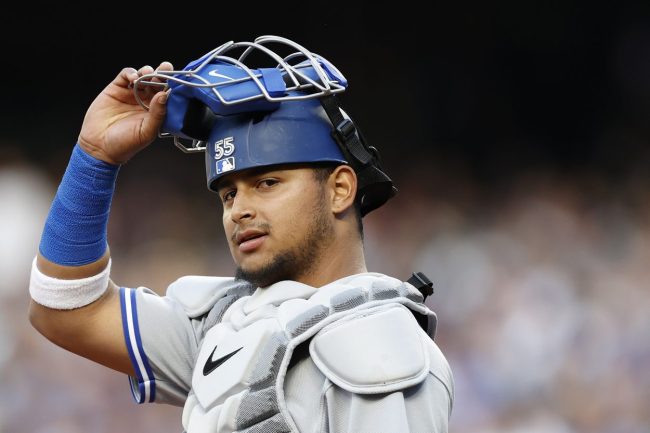 Moreno is a 22-year-old Venezuelan catcher whom the Toronto Blue Jays signed as an international free agent all the way back in 2016. That decision has paid off for the Jays as Moreno has flourished in recent years. He’s currently the organization’s top-ranked prospect according to MLB.com and ranks as the No. 7 prospect in all of baseball.

The budding star made his Major League debut on June 11 in a 3-1 loss to the Detroit Tigers. He then stayed with the big club, playing 18 games and hitting a very respectable .276 in that time. But Moreno has spent most of his year playing for the team’s Triple-A affiliate, the Buffalo Bisons.

That’s where he made headline on Wednesday night for hitting the most unique double that you’ll probably ever see. Moreno stepped to the plate with one out and in the bottom of the ninth inning and the Bisons trailing the Lehigh Valley Iron Pigs, 15-3.

The game was essentially over, but Moreno was still swinging for the fences. He hammered a 2-0 pitch deep to left field, and then this happened.

Jays prospect Gabriel Moreno smoked this ball so hard it got stuck in the wall pic.twitter.com/vqtcW9XtHy

The ball, which Moreno absolutely smoked at 111 miles per hour off the bat, lodged in the left field wall. But it didn’t lodge under the wall, or in a crack in the wall. No, Moreno literally broke the padding on the left field wall with his absolute screamer of a line drive.

Baseball fans couldn’t believe what they had just seen.

This is a real-life Looney Tunes gag https://t.co/cQINSdW8it

I been watching baseball since 1988 and I've never seen nothing like this before. https://t.co/0phxiSkX6Y

Getting a ball literally lodged in the padding is something you see on TV shows about superheroes or aliens that play sports. It’s not supposed to happen in real life.

Moreno appears to have some serious, serious power.