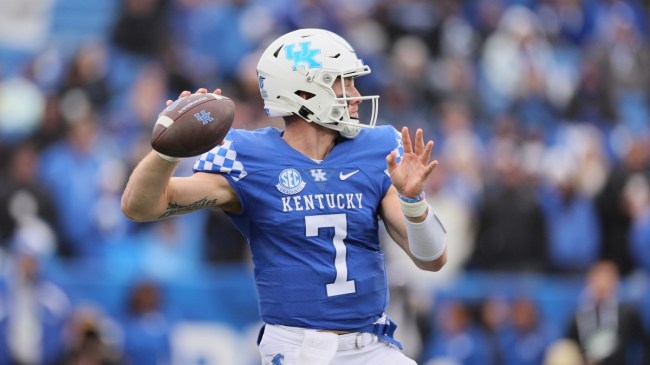 For some reason, NFL teams love Kentucky quarterback Will Levis. Levis originally started at Penn State, where he couldn’t beat out Sean Clifford. Clifford is not exactly an elite quarterback. But, Will transferred to Kentucky prior to the 2021 season and the strong-armed quarterback won the starting job. And, yes, Kentucky did win games with him last year. He completed 66% of his passes for 2826 yards and 24 touchdowns to go against 13 interceptions. And, he shot up draft boards due to comparisons to Josh Allen related to his size and arm strength. Now, one could argue that people who had him so highly rated don’t really know what they’re talking about. But, it was nearly every analyst. Not even the fact he eats bananas without peeling them or puts mayo in his coffee could dissuade them.

But, 2022 hasn’t been as good. His stats look good, as he’s completing 68% of his passes and has 16 touchdowns against 8 interceptions. But, over half of those touchdown passes have come against teams not in the Power 5. He hasn’t thrown for more than 230 yards against an SEC team, either.

On Saturday, he hit rock bottom.

Whenever an SEC team loses to lowly Vandy, you know it’s not good. Sure enough, Kentucky played absolutely awful and lost to the Commodores 24-21, at home.

Will Levis did them no favors. He was only 11/23 for 109 yards with no touchdowns and an interception. That’s a dreadful stat line against a really bad opponent.

Will Levis passed for just 109 yards today in Kentucky’s loss to Vanderbilt.

The Kentucky QB hasn’t passed for over 200 yards since Week 7 😬 pic.twitter.com/nGClRyvtF6

Will Levis went 2-10 for 18 yards in the second half against one of the worst passing defenses in Power-5 football. Just an absolute disaster on every level for UK today but it's embarrassing how terrible this offense is under Rich Scangarello.

There are people who get paid to watch and write about NFL draft prospects that want a team to take this guy to be a franchise quarterback.

Mel Kiper makes six figures and this is what he thinks.

Yes, Will Levis is still a top pick in the NFL draft. pic.twitter.com/BINgo9xqDl

It’s astonishing. This kid stinks. Imagine taking him over Hendon Hooker at Tennessee. Sadly, NFL teams do this kind of stuff with quarterbacks all the time and then wonder why their teams are never good.

It won’t get easier, as the Wildcats will play Georgia next week.