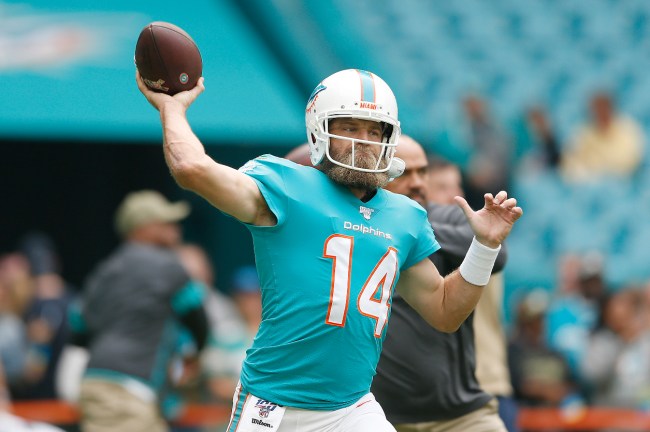 After 17 seasons and nine different uniforms, Ryan Fitzpatrick has decided to retire from the NFL. The journeyman signal-caller announced his retirement in epic fashion and sent a text message with a long list of former players to his teammates.

Congrats on a Helluva career, Fitzy!! Loved sharing the field with you!! The gratitude is all mine!! #BillsMafia #fitzmagic pic.twitter.com/s7n4DsiLJ7

The end of a remarkable journey has come upon the NFL, and although Fitzpatrick wasn’t a top-tier QB, he provided NFL fans with plenty of memorable moments.

Reliving the best moments in the career of Ryan Fitzpatrick

This list could be a long one, but we narrowed it down, somehow. Among the most notable of them all is the infamous chest hair photo when he rocked DeSean Jackson’s clothes in a postgame presser.

Ryan Fitzpatrick detailing out the 40 seconds between snaps will always be hilarious 😂 pic.twitter.com/EYVxrveWDJ

Week 17, 2019 — Ryan Fitzpatrick put the team on his back, throwing for 320 Yards and beating Tom Brady's Patriots.

After the game he LITERALLY put teammates on his back for an epic piggyback ride to the locker room.pic.twitter.com/YV8sVHC22V

Ryan Fitzpatrick’s son also gets a special shoutout for his impeccable math skills during a press conference with the Houston Texans. Just watch this.

One of my favorites moment from Ryan Fitzpatrick came from a post-game press conference with his son. pic.twitter.com/fSVfl1cu35

But, one of the most memorable Fitzpatrick moments on the field was a completed pass as a member of the Miami Dolphins and an improbable completion after a facemask.

Dropping this quick DIME of a throw by Ryan Fitzpatrick 🔥

Congrats on completing 17 seasons in the NFL 👏🏾pic.twitter.com/mXUW7MjNG6

Oh, and of course, Fitzpatrick shirtless during a Buffalo Bills game is too priceless.

Ryan Fitzpatrick’s last NFL game in Buffalo before calling it a career:

This next one isn’t exactly a Fitzpatrick moment, but the numbers of jerseys show how many different teams he played for and make for a fun memory.

Ryan Fitzpatrick saw this and said “My work here is done.” pic.twitter.com/hY2Fy4hl2q

Let’s enjoy the rest of Fitzpatrick’s memorable moments, including an all-time great interview as a member of the New York Jets.

The NFL was objectively more fun with Ryan Fitzpatrick in it pic.twitter.com/wO562Q8CB7

"I'll stick with the beard and the chest hair, and the senior citizen look." 🧔

Ryan Fitzpatrick joined our crew after #TNF and did not disappoint 😂 pic.twitter.com/Oa5LyWRZye