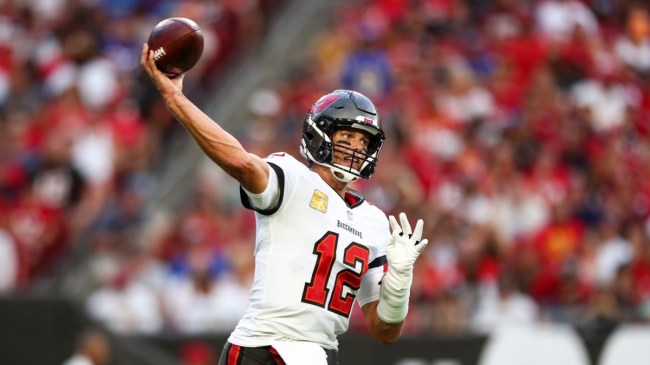 Trailing 13-6 entering the 4th quarter against the Los Angeles Rams on Sunday, the Tampa Bay Buccaneers were staring down a 3-6 ready. It’s already been a tumultuous season for Tom Brady and the Bucs.. A loss to the Rams thought it would be the straw that would break the camel’s back as it would drop the team to a horrific 3-6.

And, even in that, 4th quarter, for a while it looked like they wouldn’t be able to get it done.

But, Tom Brady did tom Brady things, and led a great drive to win the game.

Brady had another 4th quarter comeback for the Bucs

He’s done it so many times over his career, and he did it again. With no timeouts and less than a minute left in the football game, Brady and the Tampa offense got the ball back. And, he did GOAT things.

Now, that was about the dumbest defense I’ve ever seen by the Rams. But, Brady made every throw on that drive. And, he had his confidence back and trusted his guys after they dropped numerous passes.

Tom Brady just triumphantly ran off the field with his fist in the air. There haven’t been many of those moments worth cheering about this year. This coming off what had to be one of the most challenging weeks of his life.

And, in the press conference, he was still pretty pumped. up.

This is the greatest press conference Tom Brady has ever had! lmfao 🤣 pic.twitter.com/QLsYizf1w9

Tampa Bay will play the Seahawks in Munich next Sunday.