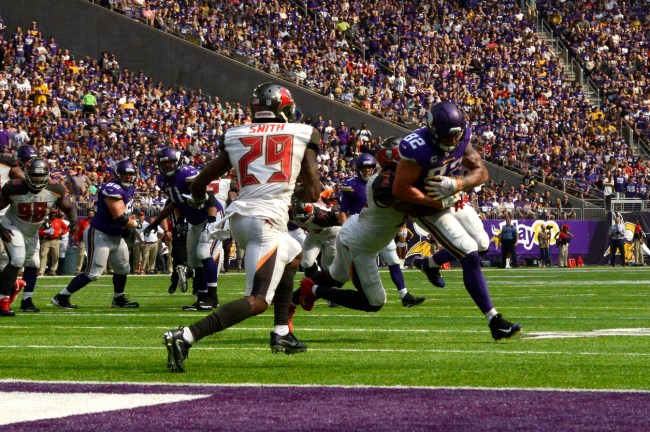 The Tampa Bay Buccaneers will be dangerous again in the 2022 season. Tom Brady retired and then returned, but tight end Rob Gronkowski announced his retirement. Is Gronk going to stay retired? Only time will tell, but his girlfriend isn’t so sure that he’s done with football.

However, the Buccaneers might feel otherwise, especially after the latest signing. According to Adam Schefter of ESPN, the Buccaneers are bringing in former Minnesota Vikings and New York Giants tight end Kyle Rudolph.

Tom Brady has a new tight-end target in Tampa: Former Vikings’ and Giants’ veteran Kyle Rudolph is signing a one-year contact with the Tampa Bay Buccaneers, per source.

The Buccaneers currently had Cameron Brate and rookie Cade Otton atop the depth chart, and that is a massive step down from Gronk. Then again, about everybody is a downgrade from Gronk.

Now, Rudolph comes to town and should immediately compete for the starting tight end spot, even if the past few years haven’t gone well for him.

In 2020, his final campaign in the Twin Cities, Rudolph finished with 28 catches for 334 yards and a score in 12 games. Then, he played 16 games with the Giants, adding 26 catches for 257 yards and a score. The Giants’ offense, in general, was a disaster, so take that with a grain of salt.

But, Rudolph has never played with a quarterback even remotely close to Brady, and the weapons on offense in Tampa Bay should allow Rudolph to flourish.

After all, we know how much Brady loves his tight ends.