Tiger Woods Brought The Waterworks Walking Up The 18th Hole At St. Andrews For Potentially The Final Time 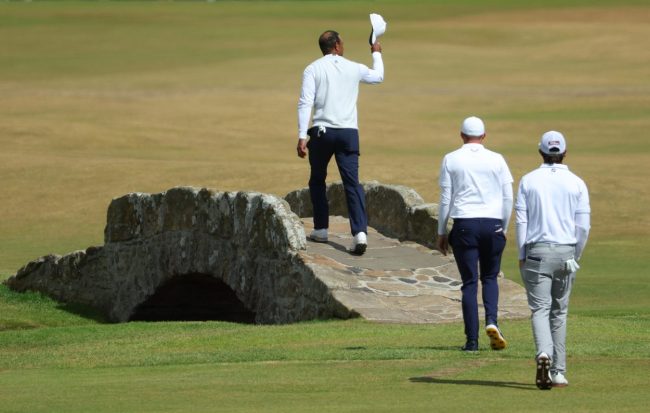 Tiger Woods’ ability to control his emotions in the toughest of situations has been a key part of becoming one of, if not the greatest golfer of all-time. But even Woods couldn’t hold back tears as he walked up the 18th hole at St. Andrews for perhaps the final time in his British Open career.

👏 Incredible scenes. Tiger Woods in tears as he walks up the 18th at St Andrews to a HUGE roar and standing ovation from the crowd. Pure emotion. pic.twitter.com/87xkQQ8T4e

Woods is going to miss the cut at the Open Championship after firing 78-75 to shoot 9-over for the first two rounds. But that didn’t seem to matter to anyone involved. His recovery from a car crash that left him unable to walk has been the stuff of legends. While Woods hasn’t been overly competitive in three tournaments since returning, The Masters, PGA Championship and Open Champion, his return has solidified his status as one of the sport’s true iron men.

St. Andrews in particular holds a special place in Woods’ history. He won the first of his three Open Championships at the venue in 2000 and then his second in 2005. The so-called “home of golf” is considered magical for many a golfer, and Woods is one of them.

Earlier in the weeks, Woods shot down rumors that he would retire from the game of golf following the tournament. But his reaction walking up the 18th fairway won’t do much to quell speculation on that end. What it has done, however, is brought tears from golf fans across the globe.

🚨🐐 NOT DONE — Tiger cruises over the Swilcan Bridge to a thunderous applause from the St Andrews crowd. Tears in his eyes. What a legend. What a moment. #TheOpen pic.twitter.com/ozLhXUFwDu

Watching Tiger Woods walk up the 18th hole at St. Andrews, cross the bridge, receiving a standing ovation and tears in his eyes. Amazing moment.

Tiger got me crying before breakfast

Tiger crying has me crying and I hated Tiger for 10-15 years. We’re all not invincible 🤷‍♂️

Tiger got me crying at 9am in the office rn

If this is to be Woods’ final tournament as a pro, St. Andrews feels like the perfect place to say goodbye. But it’s clear that the golf world isn’t quite ready to see the big cat go anywhere quite yet.