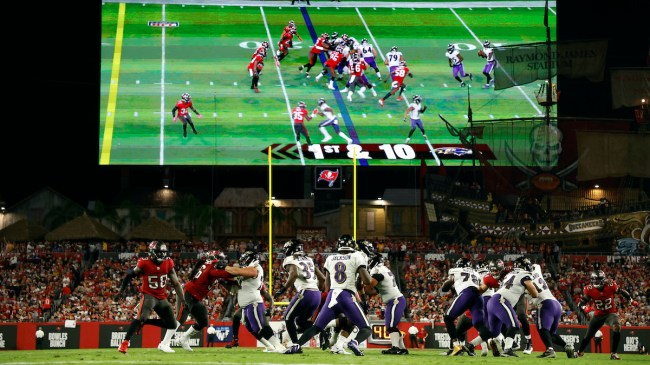 Thursday Night Football always brings about concern for injuries with the quick turnaround from Sunday and the Week 8 showdown between the Tampa Bay Buccaneers and Baltimore Ravens was a prime example of why.

Leading up to the game, the Ravens listed three key offensive players—Mark Andrews, Gus Edwards, and Rashod Bateman—as questionable. The Bucs also ruled out multiple players on both sides of the field.

With a struggling Tom Brady and Lamar Jackson without his favorite target, there was definitely a concern for a repeat of the Broncos-Colts or Bears-Commanders matchups. Luckily, game-time decisions saw all three Ravens’ players cleared to suit up.

The Ravens would rally for a 27-22 victory over the Bucs, but it came at a cost. By the fourth quarter, Andrews, Edwards, and Bateman had all exited the game with injuries.

Ravens went into tonight’s game with Mark Andrews, Rashod Bateman and Gus Edwards all listed as questionable. By the fourth quarter, each had exited the game due to injury and, unless Edwards unexpectedly returns, none will have been healthy enough to finish.

Andrews, who was listed as questionable with a knee injury, hurt his right shoulder and left the game early in the second quarter. Bateman saw limited action in the first half before leaving with the foot injury he entered with.

Edwards, who missed the Ravens’ first six games with a knee injury, hurt his hamstring early in the fourth quarter. The team is waiting for more details about his injury, but it also doesn’t appear serious.

The Buccaneers were not without losses either. Star pass rusher Shaq Barrett was carted into the locker room early in the third quarter with a potential season-ending torn Achilles.

With so many injuries during Thursday Night Football this week, some fans were worried about player safety once again. The data might not back it up, but that hasn’t stopped fans from voicing their concerns.

Every Thursday night game should be teams coming off a bye, it’s literally so simple