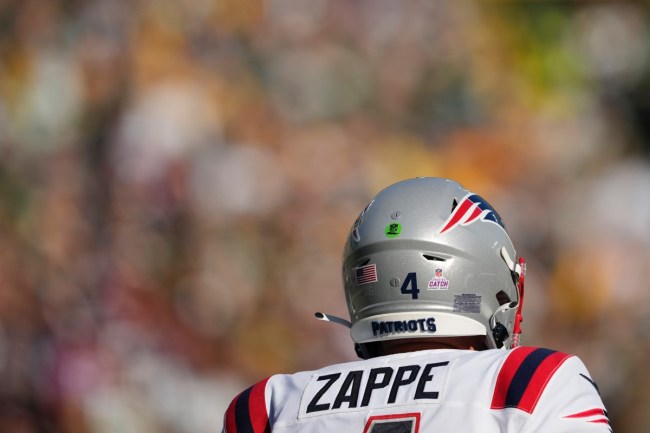 It’s been a tough go of it for New England Patriots quarterbacks. Mac Jones picked up a high ankle sprain in their week 3 loss to Baltimore. Then, backup Brian Hoyer suffered a concussion early on in the Patriots’ overtime loss in week four to the Packers, leaving rookie Bailey Zappe as the only healthy quarterback.

It was speculated all week that Mac Jones might be able to return and play for New England against the Detroit Lions, and now we have our answer.

The Patriots are starting Bailey Zappe at quarterback

The Patriots know who they will have to start on Sunday, and it’s not Mac Jones.

QB Bailey Zappe will start for the Patriots in Week 5 vs. Lions, per @Schultz_Report pic.twitter.com/wdIznlnTzu

Zappe was a virtual unknown two years ago, as he spent the first three seasons of his college career at FCS Houston Baptist. But, he transferred to Western Kentucky for the 2021 season and had a historic campaign. He threw for 5967 yards and 62 touchdowns to go along with three scores on the ground. The Patriots selected him in the 4th round with the 137th pick.

Now, he’s starting for one of the league’s marquee franchises.

The NFL world is buzzing about the rookie

Zappe was a college football cult sensation last year, and NFL fans are starting to learn about him as well.

Bailey Zappe last season for the University of Western Kentucky threw for 5,967 yards and threw for 62 TDs. His best tool is his accuracy. He also learns on the fly, so this kid will be prepared.

Some fans are saying they prefer Zappe over Mac Jones, which is pretty wild to say considering Zappe has only thrown 15 passes in his NFL career and Jones took a bad roster to the playoffs last year as a rookie.

The people who are saying Bailey Zappe is better than Mac Jones are trying wayyy too hard to be different.

Of course, late-round backup quarterbacks have worked out pretty well in New England before.

Zappe will be looking to avoid a 1-4 start for the Patriots.