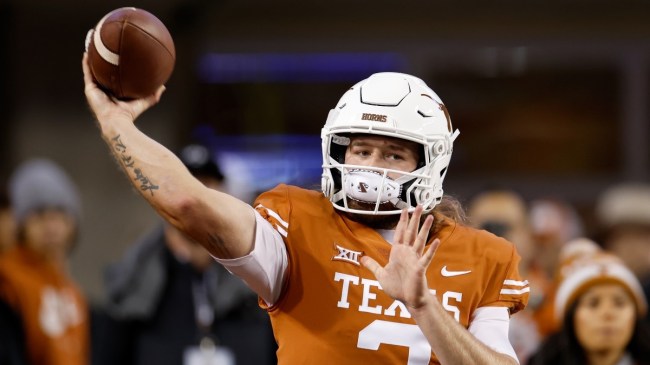 Quinn Ewers was supposed to be the savior for the Texas Longhorns. The former top recruit in the country was billed as a generational quarterback talent. He left high school a year early and went to Ohio State, but transferred back to his native Texas in the offseason for reportedly a boatload of NIL money.

And, it looked like it was going to work out for a while. Ewers was lights out against Alabama in the first quarter before he left with an unfortunate injury. The injury to his non-throwing shoulder kept him out until the Red River Shootout against Oklahoma. But, against the Sooners, he and the rest of the Longhorn offense was dynamic. It looked like Texas had a quarterback that would take them to the top.

But, Ewers played horrific down the stretch in a loss to Oklahoma State. And then, on Saturday night against undefeated TCU he was downright awful. Now there are questions about his future as a quarterback.

The TCU defense came in ranked 89th out of 131 in total defense. That is not very good! Yet, Texas, one of the nation’s top offenses, did not score a touchdown on offense. Ewers was a big part of it. He was just dreadful.

He started an astonishing 0-7 with an interception.


a
The middle of the game wasn’t good, either. He looked lackadaisical and his footwork and mechanics were terrible. This was a big play in the game, and it’s just terrible quarterback play. He has plenty of time to try to use his legs and extend the play and make a play. Instead, he flicks it into coverage.

And, there was this on what was effectively 4th and ballgame. Just like before, he quits on the play way too early.

And with top recruit Arch Manning coming in next year, it seems like there is already a quarterback controversy.

All in all, another year that Texas is not back