Texas Is Back! The Longhorns Are Ranked No. 1 In USA Today Coaches Poll* (*Sort Of) 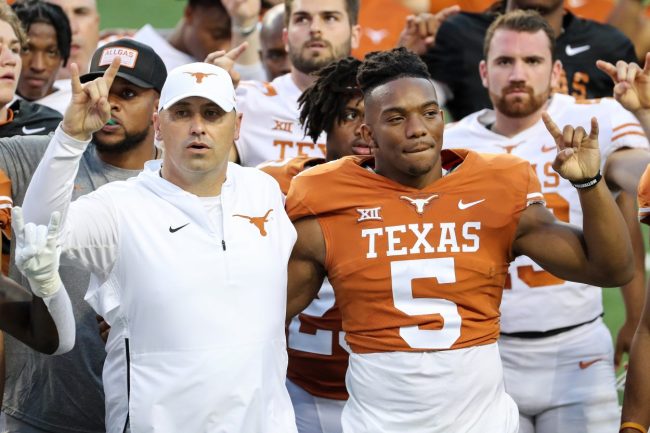 The first edition of the 2022 USA Today Coaches Poll is out and, unsurprisingly, the Alabama Crimson Tide sit at No. 1. After a “rebuilding season” in 2021 where the Crimson Tide still reached the national title game, Alabama received a whopping 54 of the 66 available first-place votes.

Ohio State checked in at No. 2 ahead of Georgia, Clemson and Notre Dame to round out the top five. The big surprise of the bunch, however, is the Texas Longhorns. Despite what the haters (lookin’ at you, Kirk Herbstreit) may say, the Longhorns appear to be back. At least according to one voter, who put Texas at No. 1 in the coaches poll. There’s no word yet on whether Texas head coach Steve Sarkisian has a vote in the poll.

The Longhorns went just 5-7 a year ago. But Heisman Trophy candidate Bijan Robinson is back and Texas added blue chip transfer Quinn Ewers to the fray in the offseason.

Even so, college football fans found it comical that anyone could consider the Longhorns the best team in the country.

I must know who gave Texas a 1st place vote… https://t.co/WJzBLiN330

The coach who gave Texas a #1 vote has been identified pic.twitter.com/zVdv8y5RPw

Saban running to give Texas a first place vote so he can say they played the #1 team in the country pic.twitter.com/MJPZ37B4kb

If Texas truly is for real, the college football world will learn pretty quickly. The Longhorns have a brutal test in week two when they play host to No. 1 Alabama in Darrell K. Royal-Texas Memorial Stadium. If that weren’t difficult enough as is, Crimson Tide-turned-Longhorn running back Keilan Robinson gave his former team a little extra motivation. Robinson made a bold claim about his team’s chances in the offseason.

“Knowing what I know, seeing what I see every day, being here [at Texas] and being there [at Alabama], I know we can beat them boys.”

As a Texas fan or coach, you have to admire the confidence. But for the Longhorns’ sake, Robinson better hope that coaches poll voter is onto something.