As It Turns Out, Texas Is Not Back As The Longhorns Lose In Humiliating Fashion 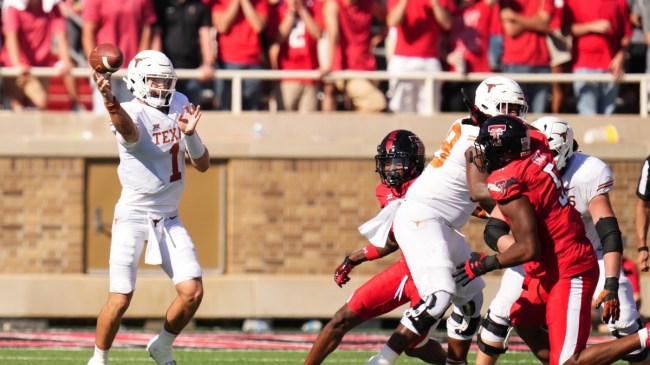 “Texas is back” has been a meme for quite some time. The Texas program has not been the same since Colt McCoy was knocked out of the BCS National Championship Game at the conclusion of the 2009 season. Oftentimes, they’ve looked to be on the verge of being back to the level we expect from Texas. But, it hasn’t come to fruition.

This season, they narrowly lost to #1 Alabama at home, 20-19 and I was fooled. I thought they were back. Especially considering that star quarterback Quinn Ewers left that game early after moving the ball at will against the Tide, I thought this was the year. I was oh, so, wrong.

Saturday, the Longhorns traveled to Lubbock to face rival Texas Tech. But, their defense couldn’t get off the field, as Texas Tech ran an incredible 97 plays on offense in regulation. When the Red Raiders kicked a go-ahead field goal with 21 left
to go up 34-31, it looked like Texas was going to lose in regulation.

But, Texas drove down the field into field goal range in limited time, and this kick sent it to overtime…

Texas just went 40+ yards in 21 seconds and kicked the game-tying FG to send it to OT!! https://t.co/gHwK6QrV6i pic.twitter.com/pZ5Wxhn24P

Of course, it was too good to be true for the Longhorns.

Longhorn fans are sad and others are making fun of them

For some reason everyone roots against Texas. Maybe it’s because I loved Vince Young but I like Texas being good. Others obviously disagree.

First off, some Longhorn fans want Steve Sarkisian fired. I think they’re absolutely crazy, but they do exist.

Then again, this guy who thinks the Longhorns are just holding back until they get to the SEC is probably more delusional.

You guys just wait until #Texas gets to the #SEC! pic.twitter.com/RJGW57tp7M

Mine too, @MoneyMosley10. Mine too.

Texas football has destroyed my mental health yet again