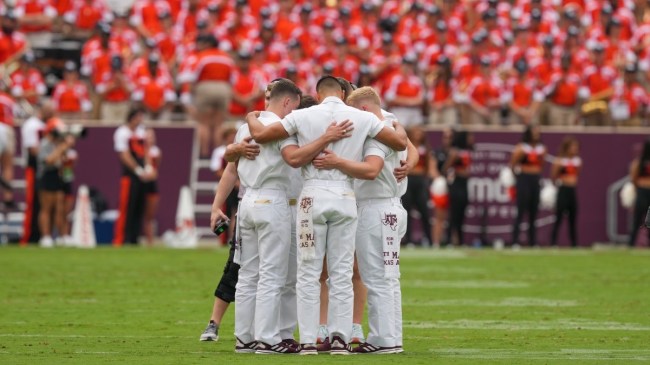 Texas A&M has a lot of traditions, most of them cornier than you can imagine. Make no mistake, Midnight Yell is one of those. In short, Aggie cadets lead thousands of people in cheers at midnight on days before Texas A&M home games.

But, the cringe went to a new level on Friday night, before their loss to the same Appalachian State team they were making fun of. The comments about Appalachia are borderline offensive and the jokes just do not land.  The video of the incident has gone viral. Within an hour of it hitting mainstream college football Twitter, it had been seen around a million times.

This just dropped onto our desk.

They may wanna stop streaming this because YIKES. pic.twitter.com/ZPf7gVywHF

Funny. The team this so-called student leader had to look up to know who they were, embarrassed a team with a $30 million recruiting class on their home field.

The internet piles on Texas A&M

Naturally, the internet had to take its shots at the cult that is Texas A&M.

It is kind of weird that they do not have cheerleaders, but instead dudes in all white on the sidelines each week.

Midnight Yell and the male cheerleaders/milkmen in overalls is the gift that keeps on giving. #A&MCult

Maybe next week they can write funnier jokes

I get that it’s a tradition to do this but maybe you should make part of the criteria of being a yell leader being able to come up with funny jokes about the team. Cause this is horrible.

Many people have called Texas A&M a cult and this kind of stuff does not help them to refute that.

It’s more of a cult gathering.

Of course, College Station, the home of Texas A&M, is not exactly booming with culture itself and it made no sense of them to make fun of a place that has a lot of similarities to College Station.

It will be interesting to see how much this clip blows up this week.