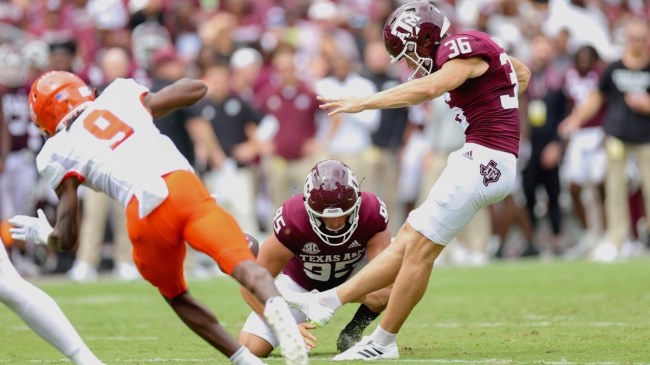 Texas A&M did not play well against Appalachian State Saturday, to say the least. The defense got beat up by an Appalachian State rushing attack despite spending tens of millions of dollars on a recruiting class full of highly-touted defensive linemen.  And, quarterback Haynes King was atrocious.

Even with their poor play, the Aggies had a chance to tie the game at 17 with four minutes and change left with a 47-yard field goal attempt by Caden Davis.

What happened instead was one of the worst attempts at a field goal anyone had ever seen and Texas A&M lost to the Mountaineers 17-14.

The loss is even funnier when you realize that Texas A&M, who has never won anything that ever mattered and their boosters have been trying to buy titles for decades.

Texas A&M fans are melting down

Of course, all of those rich Aggies want a return on their investment. And, losses to Appalachian State aren’t it.
The players aren’t the only people getting at aTm getting paid more than their market value. Enter head coach Jimbo Fisher.

Jimbo better have all the answers post game. We got out coached.

Jimbo Fisher wasn’t exactly lighting it on fire at Florida State before or after Jameis Winston, either. And, some Aggie fans feel they may have been sold a bill of goods on their highly-paid head coach.

Tired of the same old. Nothing changes except the players. Jimbo is not the coach we thought.

Haynes King failed to even have 100 yards through the air. Of course, a lot of Aggie fans want to see freshman quarterback Conner Weigman.

Can we start @ConnerWeigman now?

Seems like the A&M faithful will have to wait another year for the national title they are willing to sell their soul and oil wells for.