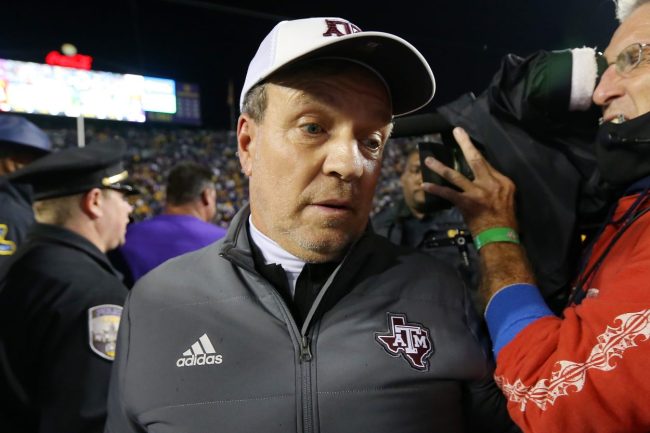 The college football offseason has been as much about Texas A&M  than perhaps any other program in the country. The Aggies hauled in an historically great recruiting class, but Jimbo Fisher doesn’t seem to want to talk about NIL. Though that hasn’t stopped TAMU staffers from discussing opportunities with prospects.

When Fisher hasn’t been talking about recruiting, he’s been in a war of words with Alabama coach Nick Saban. Fisher even went so far as to call his former boss a “narcissist.” A bit of time has passed since the bickering between the two. But Fisher still doesn’t quite seem over the whole deal.

The Aggies went just 8-4 in 2021. But the incredible recruiting class has sparked optimism around College Station and expectations are high entering the 2022 season.

Though those outside of Texas don’t seem to be as high on Fisher and company.

The SEC conducted a straw poll at the annual SEC Media Day to determine who media members think will win the conference in 2022. Alabama led the way with a whopping 158 votes, well ahead of defending national champion Georgia with just 18. The Bulldogs sent a tremendous amount of talent from their 2021 team to the NFL.

Shockingly, South Carolina garnered three votes to finish third. Hilariously though, the Aggies came in just behind. Texas A&M received just one vote in the poll. That tied them with cellar dweller Vanderbilt, which won just two games in 2021.

Vandy head coach Clark Lea made some bold comments about his program earlier in the week. But I don’t think many fans believe the Commodores will be on the Aggies’ level anytime soon. Though they did find amusement in the poll results.

Clark Lea said, in time, Vanderbilt will be the best CFB program in the country.

Three days later, Vanderbilt has the same amount of votes to win the SEC as Texas A&M…

Who knows? Maybe we’re just sleeping on the ‘Dores.