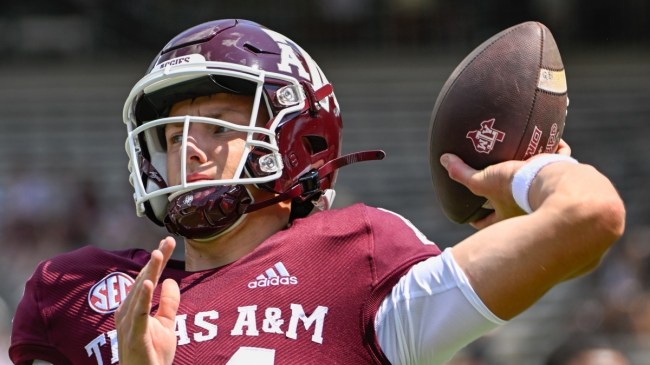 And, Head Coach Jimbo Fisher, who was known as a quarterback guru, had to be unsatisfied with the quarterback play. Starter Haynes King was just 13-20 for 97 yards again the Mountaineers. And, the Aggies have young options at quarterback, too.

Jimbo Fisher announces a new starter for the Aggies.

There’s a lot of pressure to win at Texas A&M right now, and apparently, it has convinced Fisher to make a change. It is reported that Max Johnson will start at quarterback for the Aggies.

Max Johnson is the nephew of Super Bowl Champion Brad Johnson. He is a transfer from LSU where he had 35 touchdowns and nearly 4000 passing yards in eighteen games.

Fans of the Aggies were elated at the news.

But, this fan acknowledged that a lot of the move is just giving fans and boosters what they want.

Yeah king had his chance and Jimbo would take too much heat if he flopped again.

Max flops Jimbo can say I gave you what you wanted.

@ShaunP25 might be a little ahead of skis here, considering that quarterback is not the only area they haven’t look good at yet.

@artarte must think that you can’t get these things at LSU. I’m not sure if he knows anything about college football.

This is why he transferred to A&M…Bright Lights…Sold Out Game…12th Man…Prime Time Game ….Against Top Teams. Now O line Better wake up and do their part.

It remains to be seen how this turns out for Texas A&M, who must beat Miami (Fl) this weekend or else the wheels will have fallen off.