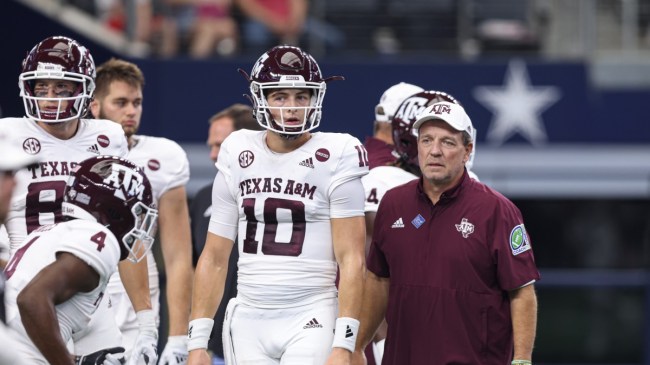 It’s been an absolute train wreck of a season for the Texas A&M Aggies. They are 3-4 on the season and tied for last in the SEC West with a 1-3 conference record. And, they’ve embarrassed themselves off the field, too Their loss to lowly South Carolina on Saturday was especially humiliating, as they fell behind 17-0 early and never recovered.

That’s a lot of losses for a recruiting class they allegedly paid millions and millions of NIL dollars for. And now, more embarrassing news is surfacing.

Some Star Texas A&M Recruits Are Getting Suspended, According To Reports

When it rains it pours. I’ve been told at least three and perhaps four A&M players have been suspended indefinitely by Aggie head coach Jimbo Fisher, all from the true freshman ranks.

Rumors started that it was due to some of the recruits of the star-studded freshman class trying to convince others to transfer.

While it is unclear as to why they were suspended, the rumor mill has already started churning.

The players alleged to be involved are some pretty big names, and all were top 100 recruits in America.

There is a fourth player who is rumored to be suspended. But that is unconfirmed.

Many on the internet seemed to prematurely jump onto rumors about the nature of the suspensions and updates/corrections have since been issued, including here.

Say what you want about their play on the field, but it is hilarious that this is happening to the most morally bankrupt staff and program in America.

Anyways, a program that has never won anything in the modern era of college football will continue to underachieve. Jimbo better get it together, or he will go down as one of the biggest failed hires ever.

This post has been updated and we will update it further as more facts come to light.