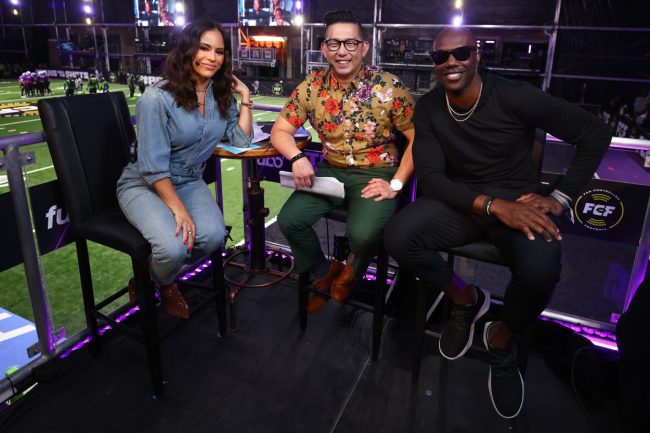 Terrell Owens is living his best life in retirement The legendary NFL wide receiver was finally inducted into the Pro Football Hall of Fame in 2018 and is now living it up as part of the Fan Controlled Football league.

But things went off the rails a bit for T.O. on Wednesday night when he got into an argument with a woman  in his neighborhood that led to the woman calling the cops.

Terrell Owens and a woman got into such a heated dispute in their neighborhood on Wednesday night, cops got involved. https://t.co/6UVyax6MG7

Owens filmed a significant portion of the incident, in which he remained calm throughout while the woman appeared to cry and raise her voice at him, and posted it on social media.

At one points during the incident after police arrived the woman yelled at Owens “you’re a black man approaching a white woman.”

The woman alleged that the incident began after Owens was speeding in his car through the neighborhood. Though a witness, presumably another neighbor, says on camera that she was in her garage and that Owens was not speeding.

Owens then exited his vehicle, which he says was because the woman was yelling profanities in his direction. The woman alleges this was an attempt to intimidate her.

A report by TMZ further details the entirety of the incident.

“You don’t yell at me and tell me I almost hit you and I didn’t,” Owens can be heard telling the woman in the video.
“But, you didn’t have to get out of your f***ing car!” she replied.
Owens continued, “You didn’t have to talk to me that way, either! Karen!”
That’s when the woman yelled back, “You’re a Black man approaching a white woman!”
The woman then broke down in tears a few moments later. Owens accused her of hamming it up for the cop on the scene.”

Police officers appeared to de-escalate the situation before Owens stopped filming. No charges were filed.