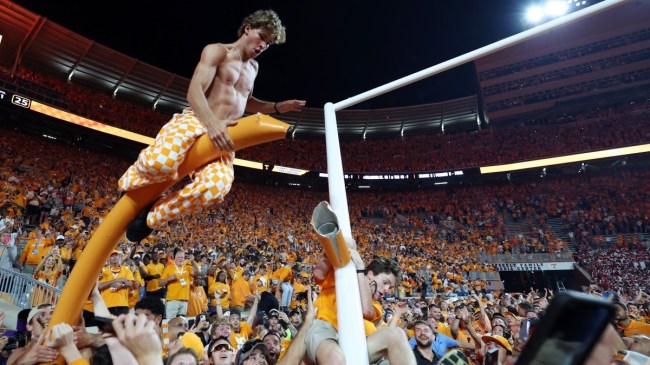 It was quite the scene last night in Knoxville, Tennessee. The Tennessee Volunteers beat Alabama in a classic, 52-49. That, of course, triggered a massive celebration inside Neyland Stadium that included the first field storming in Knoxville since 1998.

Naturally, those that stormed the field tore off the goalposts.

You can start to see them go down

Feel bad for anyone who doesn’t like CFB pic.twitter.com/FPwulzVmbk

Then, they took them downtown and paraded them through the streets.

The Tennessee goalposts are heading to the bar

And then, they ended up in the Tennessee River.

Tennessee fans have placed the goalposts in the river. Where it will live forever.pic.twitter.com/6iUuCCTfoM

Quite the scene in Knoxville. Only one problem. Tennessee hosts UT-Martin this upcoming weekend at home, and now they’re down one set of goalposts.

On Sunday, Vol Athletics sent out this tweet asking for donations to raise money for a new set of goalposts.

Y'all remember how we tore the goalposts down, hauled em out of Neyland and dumped em in the Tennessee River?

Yeah that was awesome.

Anywho, turns out that in order to play next week's game, we need goalposts on our field. Could y'all help us out? 🙏 https://t.co/NSMoL3SzPX

It’s unclear how sincere the tweet is, seeing how the athletic department revenue is around $140 million. But, it seems to be a great time to capitalize on the biggest win for the program in decades to raise some extra cash.

The University of Tennessee—a school with a $1.34 billion endowment and $150 million in annual athletic revenue—setting up a GoFundMe for fans to buy them new goalposts is one of the funniest things I've ever seen pic.twitter.com/OjOITIWGZS

some people are upset that they’re even asking for money.

Tennessee beats Alabama…tears down their own posts..but want to start a gofundme for fans to pay for the new posts so they can play next week..
When you have a $1 billion endowment fund

But, I think it’s not really for the goalposts at all, and so does this person.

If people think the moneys actually going to field goal posts, they’re going to be disappointed🤣

Either way, I’m sure they’ll find a way to have a new set of goalposts at Neyland Stadium on Saturday.