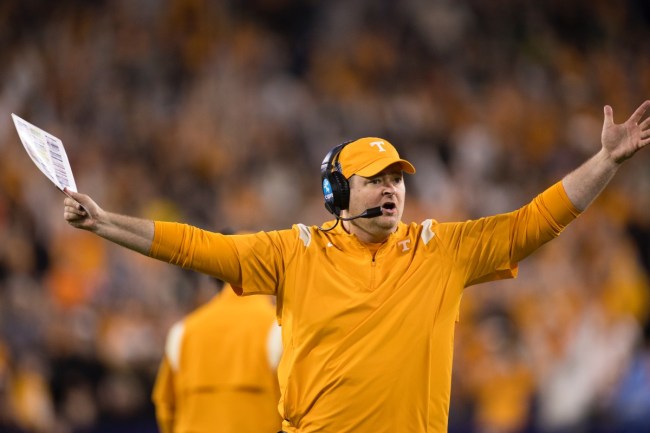 [
Tennessee has been stuck in no-mans-land since the firing of Philip Fulmer fifteen years ago. The proud program has gone through five coaches since then. But, this time, Josh Heupel seems to be the right guy to get Tennessee back into the top echelon of the SEC.

Tennessee locks him up long-term

Volunteer administrators must love what they’re seeing, because just fifteen games into his tenure in Knoxville, he is getting a big extension.

Tennessee has extended Josh Heupel to 2028.

He will now make over $5 million a year. pic.twitter.com/uMj5WthVzR

The salary isn’t jaw-dropping when you consider what other people in the SEC are making. But, it does show a long-term buy-in for recruits and the program, and it seems like Tennessee is finally committed to a coach long-term.

This is a positive step forward after the disastrous tenure of Jeremy Pruitt. Pruitt was let go as he was embroiled in multiple scandals.

Vol Fans and others react

@_MrReality_ points out that the salary isn’t really all that big.

This is good timing for Heupel. After a game against Akron this week, they get Florida, LSU, Alabama, and Kentucky in four of their next five games.

Can they take that back when they lose 3 of their next 5?

This fan thinks this is the most fun he’s had watching Tennessee and thinks Heupel deserves a higher salary. I would have to agree.

This is the funnest Offense I’ve ever seen at Tennessee and he’s recruiting good and has the team playing good. Pay the man! I think he deserves 7M/year. There’s no coach I’d rather have.

Of course, if this tough stretch of games doesn’t go the Volunteers way, $5 million a year may look like too much.