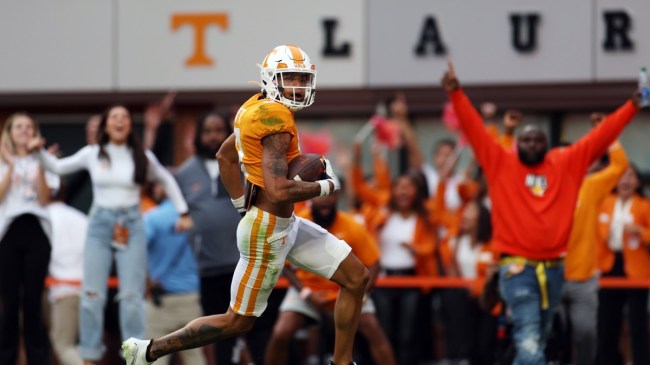 There’s nothing like college football. No sport in America elicits the over-the-top passion and loyalty as college football does. And, for Tennessee fans, they’ve needed the loyalty after losing to Alabama fifteen straight times, every year since 2007 on the third Saturday in October.

That streak is no longer as the Vols beat Alabama 52-49 in a classic at Neyland Stadium in Knoxville, Tennessee.

It was an absolute classic

In the most anticipated home game in years at Neyland, sixth-ranked Tennessee jumped out to a 28-10 early lead on Alabama. But, the Tide, beyond a sensational performance by Bryce Young, came back and took leads at 35-34 and 49-42.  Tennessee scored a touchdown after an apparent interception, and a long return by the Tide was wiped out via penalty. But, Alabama drove down the field and had this kick to win the game.

Most thought the game was headed to overtime, but Hendon Hooker had other ideas. He drilled Volunteer receivers on in-breaking routes on back-to-back plays, setting up this chance for Tennessee, thirteen years after Terrence Cody blocked their game-winning field goal attempt back in 2009.

TENNESSEE TAKES DOWN ALABAMA AND THE FANS ARE STORMING THE FIELD AT NEYLAND STADIUM.

WHAT A WIN FOR THE VOLS. pic.twitter.com/1MkxrkyxBA

Vol kicker Chase McGrath did not hit that ball well at all, and it somehow went in. It was a total reversal of the all of the misfortune the program has faced for two decades.

The scenes postgame at Tennessee are unreal

Of course, Vol fans stormed the field. It was the first field storming in Neyland Stadium since 1998. As they were storming, the song Dixieland Delight, traditionally played at Alabama games, blared from the stadium speakers.

Neyland is a madhouse.

A deserving time to storm the field if ever there was one. pic.twitter.com/sqjiTrNu9S

The goalposts came down, too, and who knows where they will end up.

The Tennessee goalposts are heading to the bar

As for Knoxville, there will not be a more fun place on the planet tonight.

The goal posts are heading into downtown Knoxville

What a night to be a Vol pic.twitter.com/1wPaU6RD9j