TCU Posted A Hilarious Horns Down Compilation After Beating Texas 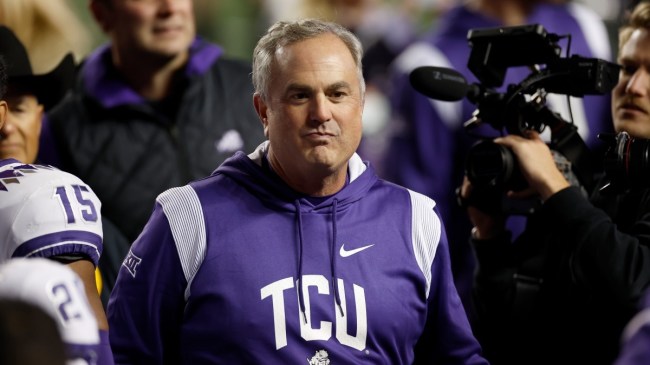 Everyone loves to beat Texas. They’re thought of as one of the most obnoxious and arrogant fan bases in all of college sports. And, when you consider the football program has not been good for a decade, it’s even weirder that they’re so arrogant. TCU fans know that firsthand as they share a state with them.

And, on Saturday, TCU’s cinderella season continued as they beat Texas on the road 17-10. The Longhorns were actually favorites in the game despite having three losses compared to the undefeated Horned Frogs. But, the TCU defense was magnificent, holding Texas without an offensive touchdown and made Quinn Ewers look really bad.

After the game, the TCU social media team had a surprise for Texas fans.

We all know the famous Horns Up symbol that Texas fans do. And, by now we know that those who don’t like Texas like to turn it upside down. Well, TCU went all in on that.

This is hilarious. Job well done to their social media team.

Oh this is TOP tier trolling.

College football pettiness >>> everything else https://t.co/6C68WdTaQu

Oh this is TOP tier trolling.

This is the greatest win video I’ve ever seen https://t.co/P57znOyqPL

I don’t know who is in charge of this account this year but I love them. https://t.co/gQBZPW0dZJ

Apparently, the social media team in Fort Worth has been killing it with these videos all year. This is the kind of stuff that makes college football the best sport in the world. As someone who actually likes Texas, this video is still really funny.