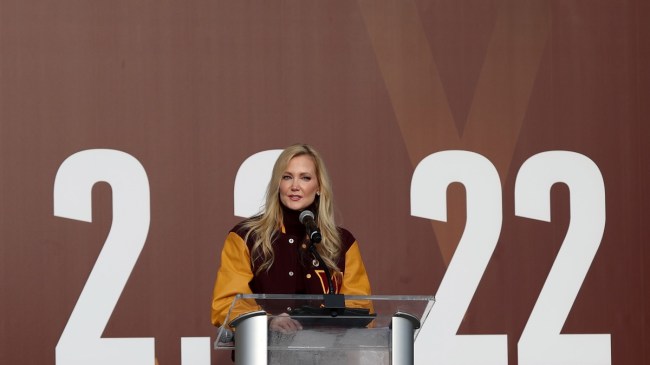 It’s been pretty well-established to this point that the Redskins was not a very politically correct name. Even as I sit here writing it for this article, because that’s what was actually said, I realize it’s not really a word people should be using casually.

Of course, one-half of the world’s worst couple, Dan Snyder’s wife Tanya, didn’t get the memo and instead used the old team nickname in an attempt to fire up supporters. It’s another in a long line of Washington scandals.

Tanya Snyder used the phrase at a homecoming event

It was homecoming weekend for the Commanders’ organization, and they were welcoming back old players. Tanya Snyder had some nice things to say, but then said the controversial team name.

Tanya Snyder: “It’s a day for us to celebrate the history, legacy and tradition of the burgundy and gold.”

At the end of her speech, which is clipped bc of Twitter’s 140-sec limit, she gave a well-received, “Hail to the Redskins!” pic.twitter.com/8jVdvxg5G4

Here’s the end of the video of Tanya Snyder, which includes her “Hail to the Redskins” (:20). https://t.co/XpIqKP9z3T pic.twitter.com/H5tSIWht6V

Yikes. I mean, the banner is right there. Someone in the organization is clearly trying to get people not to say Redskins, and yet the person who is supposed to be in charge said it.

Let me remind you how terrible the Snyders are.

Fans booed Tanya Snyder when shown on scoreboard and yelled "Sell the team." Signs saying such were taken by guards. But, sure, let's welcome the team's great players back for homecoming on a team that was a different name before a crowd of about 2/3 Packers fans.

Of course, they probably will not sell the team. It’s a terrible time to be a Commanders fan, though they did upset the Packers, 23-21.