Sydney McLaughlin Brought Twitter To A Halt With Her Incredible, Record-Setting Performance 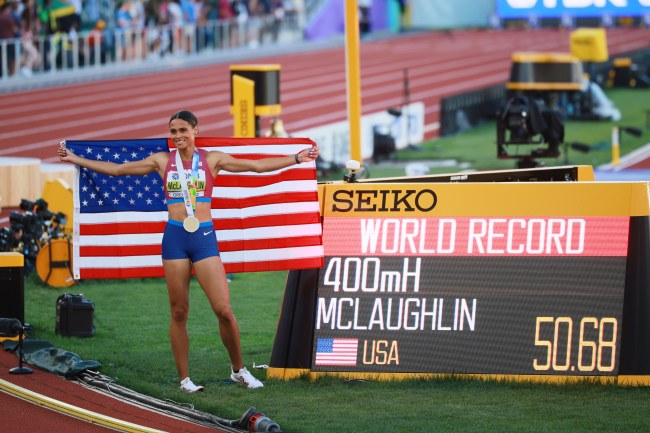 At just 22 years old, New Jersey native Sydney McLaughlin has already captivated the entire track and field world. The 400-meter hurdler won silver in the event at the 2019 World Championship in Doha just 19 years old. There, she finished behind fellow American Dalilah Muhammad.

Since then, it’s been all about McLaughlin. The young star took gold in the Tokyo Olympics with a time of 51.64 to set both a World and Olympic record. McLaughlin then ran a 51.41 to break her own record last month at the US World Championship Trials.

The two squared off once again on Friday night in the finals of the 2022 World Championships, and McLaughlin absolutely stole the show.

McLaughlin went out fast from the fifth lane to take the lead. But rather than fading and having to hold on, the phenom just kept getting strong. She won the event by over ten meters ahead of Femke Bol of the Netherlands, with Muhammad in third.

Her time however, was had everyone in awe.

McLaughlin ran an absolutely jaw-dropping 50.68 to break her previous record by nearly a second. It’s the fourth time in 13 months that she’s broken her own record. The incredible run stopped the entirety of Twitter in its tracks to recognize greatness.

She’s just special!!! @GoSydGo In a class of her own💛

After the race, even Muhammad was in awe of her younger counterpart. The former world and Olympic champ in her own right said that she believes that McLaughlin could break the 50-second barrier.

McLaughlin was a prodigy from a young age. She’s been winning championships and setting records across age groups for a number of years. Now, however, she’s becoming a household name.