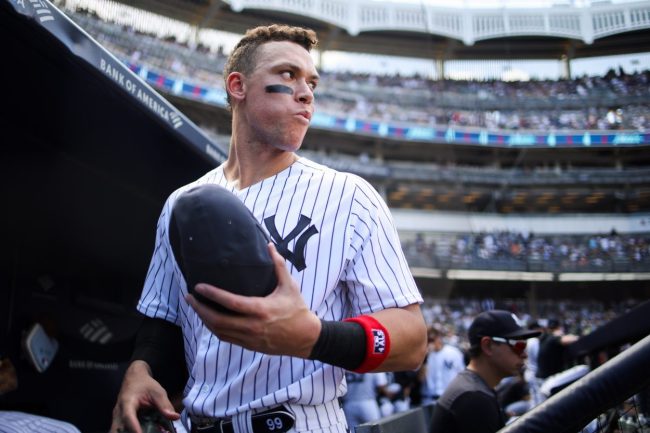 By now, everyone has probably heard of the heinous, vile fan that attended Monday night’s Subway Series game between the New York Yankees and New York Mets at Yankees Stadium.

We’re off course talking about hot dog straw guy. For those who aren’t aware, let’s go to the tape.

During the Yankees’ 4-2 victory over the Mets, one Yankees fan went where no man has ever gone before. This absolute hero of a man determined that if hot dogs are delicious, and beer is delicious, then surely drinking beer through a hot dog must be life changing. While we’re not going to try it, it’s hard to argue with that logic.

But this crime against humanity wasn’t the worst one committed at Monday’s Subway Series game. In fact, it doesn’t come close to rivaling the level of baseball crime committed by one Yankees fans in particular. Or, perhaps he’s a Mets fan?

We’ll let you be the judge.

Look, most fan rules are pretty silly. But this, this should be tried in court. We’re not sure how you show your face in New York with a split fandom like that. Beyond the obvious issues with the Mets hat and Yankees jersey, there appears to be another violation in place as well.

The fan is wearing an Aaron Judge Yankees jersey. But the Yankees don’t wear names on the back of their jerseys. So the jersey is neither authentic nor a better indication of whose jersey you’re wearing.

Fans of both teams immediately called out the violation.

Prison for life, no parole. https://t.co/ienr6JzIfT

I don’t even understand how this happens https://t.co/QDMJ4m7cwM

Not even just the Mets/Yankees combo but the name on the jersey? What is this. https://t.co/G3buvP9Tk8

Yeah, you can't be doing this. Gotta pick one https://t.co/vAdl4sIJBS

Honestly, we’re pretty surprised that this guy was even let into the game with a stunt like that. Is nothing sacred anymore?

The vibes in the Milwaukee Brewers clubhouse right now are noottttt great. https://t.co/MtH2iRyAeu

Hot dog straw man is officially off the hook.