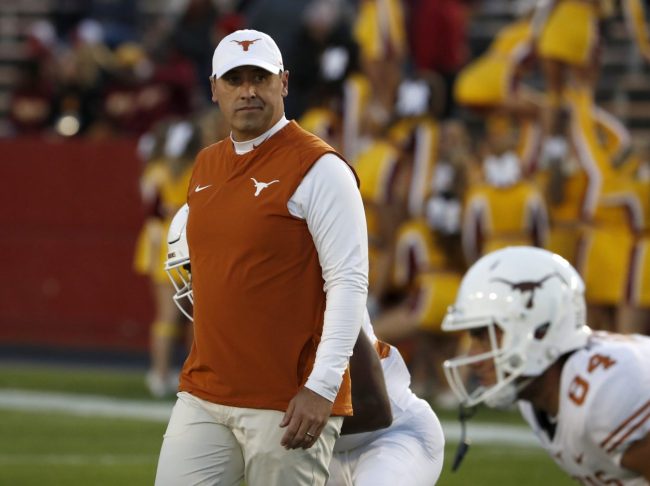 When the first edition of the 2022 USA Today Coaches Poll dropped, fans laughed at the one coach who ranked the Texas Longhorns as the No. 1 team in the country.

The Horns went just 5-7 in their first season under new head coach Steve Sarkisian and lost six of the final seven games on their schedule. Now it turns out we may know who that coach was. And the answer should’ve been obvious all along.

As ⁦@TexasFootball⁩ QB decision nears, ⁦Sark has a better feel for what comes next. There’s also another QB on his way. https://t.co/CNtqCwH1Nd

Sarkisian didn’t own up to it, but his comments on Wednesday sure make it seem as if the second-year man believes in his team in a way that no other coach in the country would.

ESPN’s Chris Low reports that Sarkisian feels his team is better positioned in 2022 than it was a year ago.

“The kids knew not everybody in that locker room was all-in last year,” Sarkisian told ESPN. “I think they could feel it, and they wanted to weed out some of the warts, some of the bad apples (and) I think they got a sense of reality about some of the things we were talking about and trying to instill last offseason. I don’t know how much they gave credence to it, and then those same things reared their ugly head in-season.”

Texas dealt with a number of significant changes in the offseason. Quarterback Casey Thompson transferred to Nebraska. The Longhorns brought in freshman phenom QB Quinn Ewers from Ohio State. In total, over a dozen Longhorns players hit the transfer portal. While Sarkisian welcomed a handful of new players, though some haven’t gone so smoothly.

The Big Ten just put the SEC and the rest of the country on notice. https://t.co/17U54Stq7Q

Whether or not the Horns are ready to take a big step with be evident immediately. Texas takes on No. 1 Alabama in the its first game of the season on Sept. 10.