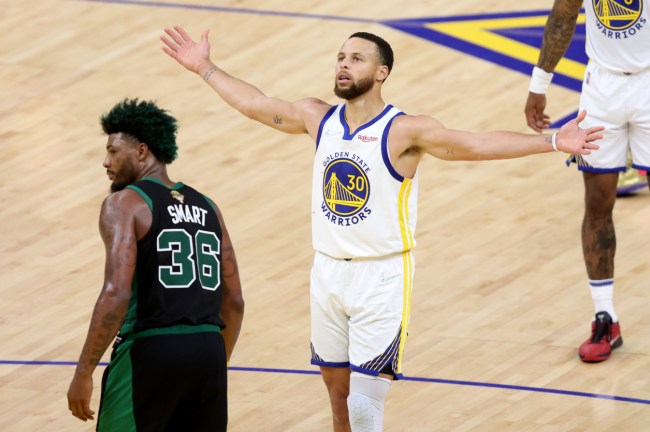 The Golden State Warriors star was well-prepared with his Game 5 postgame outfit, and the Dubs took care of the Boston Celtics to go up 3-2 and have a chance to win the NBA title on the East Coast Thursday evening.

After the game, Curry pulled up to the press conference with an all-time classic shirt — and Boston fans must be triggered even more by Curry’s wardrobe decisions.

Earlier in the series, Boston fans put a sign outside of a restaurant that read: “Ayesha Can’t Cook.”

Well, Curry didn’t forget and backed up his wife.

What a classy move by Curry, and even though he had a bit of an off-night, guys like Jordan Poole picked up the slack and helped the Warriors get the victory. In fact, Poole’s buzzer-beater to finish the third quarter shot extra life into the Warriors and their fans.

Curry has the last laugh for the time being, and he must not have been happy with his wife’s name and profession being talked about in such a manner.

Nonetheless, Curry can ride into the offseason with the biggest of laughs if the Warriors hoist the Larry O’Brien trophy at TD Garden on Thursday night.