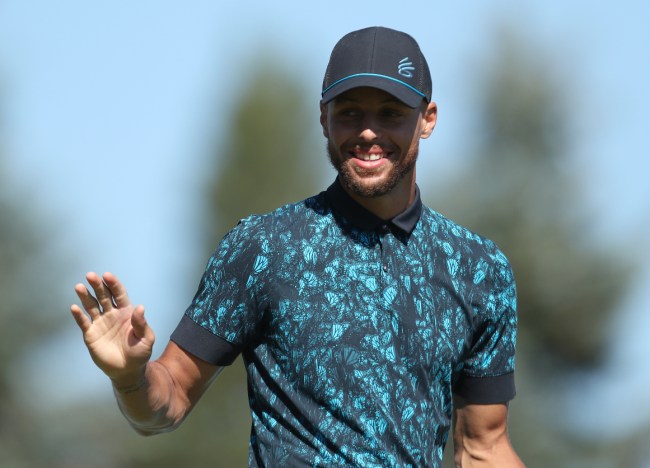 The NBA Finals are kicking off on Thursday as the Golden State Warriors and Boston Celtics battle for the Larry O’Brien Trophy. Stephen Curry is back on the NBA’s biggest stage and is trying hard for one more championship ring.

But, the Warriors star guard isn’t exactly too worried about the NBA Finals and was seen carrying a heap of golf clubs early on Tuesday.

Steph's just living his best life on off days 😂

Apparently, Curry doesn’t look too worried about the upcoming slate of games.

Does this mean that Curry is thinking ahead to his summer plans? Or was Curry perhaps getting these clubs for somebody else?

Who knows. Nonetheless, NBA fans had a field day with the viral clip and suggested that he is already looking past the Celtics.

Steph bout to tell Marcus smart that he’s about to cook him for 40 while they’re on the green ⛳️ https://t.co/jlRMH7fs1g

He’s ready to sweep the Celtics 💀

he’s getting ready to go to cancun!

Others were quick to point out the fact that he had no golf bag in sight — although he clearly just walked out of a store and most likely purchased the clubs.

Why he don’t have a golf bag lmao

Someone get this poor guys a golf bag to carry his clubs. Bless his heart.

Either way, Curry doesn’t seem too stressed out about the upcoming NBA Finals. Plus, it helps that the Warriors are expected to make easy work of the Celtics and bring another NBA title to the Bay Area.

Live on, Steph, and get that golf swing ready for the offseason. After all, everybody knows how much Steph enjoys golf.