Stephen A. Smith Is Still Riding The Warriors Bandwagon And Is All Aboard For 2023 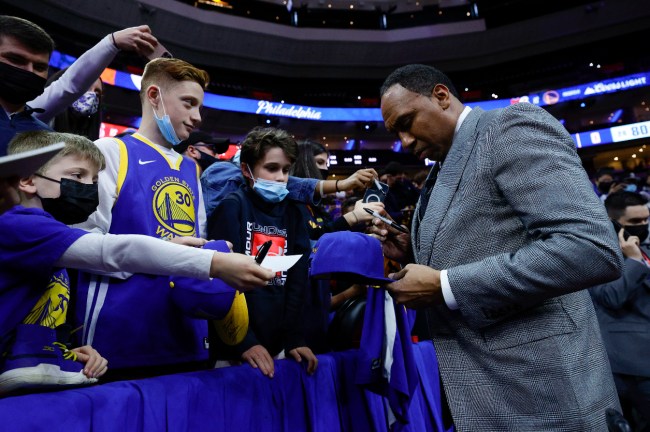 The Golden State Warriors are the 2021-2022 NBA Champions after defeating the Boston Celtics in six games. Stephen Curry FINALLY claimed the NBA Finals MVP Award, and things are going well in Northern California.

They defied the odds, did the unthinkable, and now Steve Kerr and his crew have a fourth NBA title. Kerr’s name was even tossed on Magic Johnson’s Mount Rushmore of NBA coaches.

Is this the final title for the Warriors of this era? Well, Stephen A. Smith doesn’t think so.

On Friday, one day after the Warriors won the title, Stephen A. made another bold statement — and surely this will be brought up in one way or another a year from now.

"I got the Warriors repeating. They are winning the NBA championship again next year… Steph Curry will surpass LeBron James and he will have 5 chips!"

🗣️ Stephen A. Smith predicting another Warriors title next seasonpic.twitter.com/kfUbGjPbDn

Stephen A. didn’t say they MIGHT. He said they WILL.

This is a bold claim from Stephen A., but, surprisingly, it isn’t too out of the box. Steph, Klay, and Draymond are likely in Golden State until they retire.

Jordan Poole and Andrew Wiggins would love to be back, and former first-round pick James Wiseman is expected to make a full recovery from his injury.

Oh, and the Warriors are already the betting favorites just hours after the NBA season concluded.

Who's your pick to win the NBA Title next year? 🤔 pic.twitter.com/9lwFn9YlNn

Receipts are always brought up, and the Warriors did plenty of that after winning the title — including Klay bringing up Jaren Jackson Jr.’s old Tweet.

But, let’s not forget this claim by Stephen A.