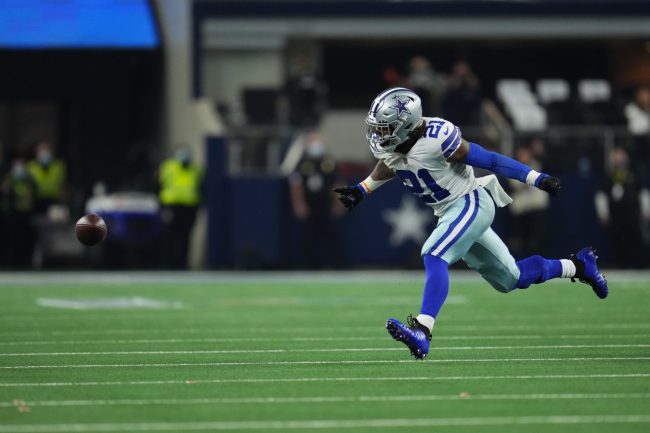 The Dallas Cowboys will look far different in 2022 than they did just a year ago. Leading receiver Amari Cooper is out the door to the Cleveland Browns. Number two wideout Michael Gallup is still working his way back from a Torn ACL suffered in a game against the Arizona Cardinals. And all-purpose weapon Cedrick Wilson signed a three-year, $22.8 million deal with the Miami Dolphins in free agency.

For that reason, team owner Jerry Jones expects the Cowboys offense to take on a much different look in 2022. This despite Dallas leading the league in points per game a year ago. Jones wants the Cowboys’ offense to revolve around star running back Ezekiel Elliott.

“We gotta have Tony Pollard out there. No, seriously, Zeke’s gotta be our feature, and he is our feature,” Jones said, via NFL.com. “We can feature him in a lot of different ways. We all recognize what he does in the passing game because of his protection ability. Don’t ever underestimate that especially with Zeke. Zeke takes some tolls when he’s out there as a back blocking. So it’s critical that we make Zeke — because he’s capable of being that — really the focus of what we’re doing.”

Elliott signed a six-year, $90 million contract with Dallas prior to the 2019 season. But the team has an out following the 2022 season that could significantly reduce his cap hit.

Jones isn’t the only one who thinks his team should build around Elliott. Noted Cowboys hater Stephen A. Smith weighed in on the matter Monday morning and sounded all-in on the Zeke bandwagon.

.@stephenasmith says Ezekiel Elliott is the key for the Cowboys to be successful this season 👀

"… If you don't have the running game, then ultimately that strategy is going to be down the drain." pic.twitter.com/Sxi36DZGHo

“But Tony Pollard still had 700-plus rushing yards, alright. Nearly half the carries, and oh by the way, not only was that the case, he was averaging over 5.5 yards a carry…you gotta be able to run that damn football. This comes down to Ezekiel Elliott.”

Baltimore Ravens fans might want to start getting a little nervous. https://t.co/7lvYsbrerm

Seeing Stephen A. Smith and Jerry Jones on the same page might seem shocking. But both may have a point when you look at Dallas’ diminished passing game. A big season from Elliott would go a long way from taking the Cowboys from pretenders to potential contenders in 2022.