Stephen A. Smith Calls Out Celtics Star Jayson Tatum For Relying On Officials During NBA Finals 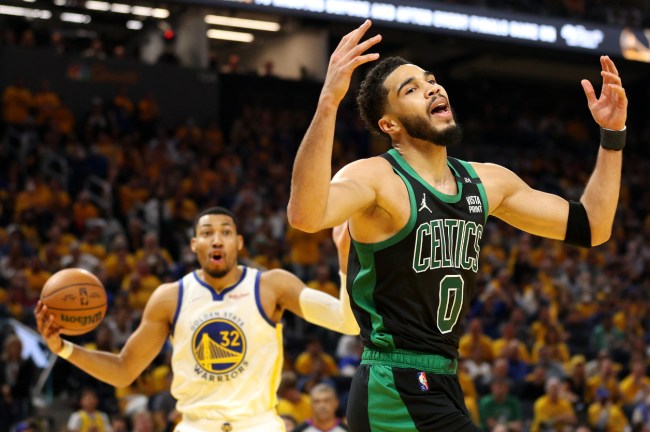 Jayson Tatum and the Boston Celtics are down to one more chance. With the Golden State Warriors up 3-2 in the NBA Finals after a strong Game 5 victory, the Celtics can even the series in Boston on Thursday night.

To do so, they will need a better performance from Tatum — among others. Tatum started off the series with just 12 points on a poor 3-17 clip from the field but has responded with for straight 20-plus point outings, including 27 points and 10 rebounds in Game 5.

Nonetheless, ESPN’s Stephen A. Smith was quick to discuss Tatum and explain what he must do to step up.

Stephen A. definitely has a point here, believe it or not.

"He's looking for help from the officials. You're not winning championships that way…come championship round, officials gon' look at you like 'What you want me to do? This is your job. Play.'"

Stephen A. Smith on Jayson Tatum heading into Game 6 🗣pic.twitter.com/DZQA3eCtgb

Tatum has played well and will need to carry the Celtics if they want one more chance to take home the Larry O’Brien trophy.

But, Stephen A. is right. The best player has to carry the team, and now is the time for Tatum to do his best impression of his idol, Kobe Bryant.

He simply can’t rely on the help of the officials. He has yet to shoot more than eight free throws in a game during the NBA Finals, and things probably won’t be changing anytime soon.

The pressure is on for Jayson Tatum.