Basketball Fans Came With The Jokes After News That Stephen A. Smith Is Off TV Following Shoulder Surgery 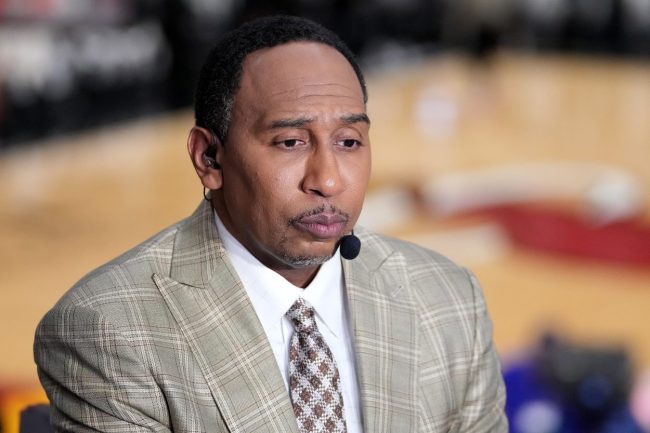 ESPN may have to hit the transfer portal to replace its MVP candidate of First Take.

Stephen A. Smith announced on Thursday that he’ll be off air for around a month. Smith says that he’s rehabbing after shoulder surgery to repair a torn rotator cuff and bicep as well as a frayed labrum. He also had a bone spur.

Appreciate the love I’ve been receiving from everyone who’s missed me on @FirstTake. I’m out because I’m rehabbing from shoulder surgery. Partial tear — rotator cuff AND Bicep, along with frayed Labrum, plus a Bone Spur. Aging sucks, but it is what it is. Back next month.#AllLove

Domonque Foxworth recently filled in for Smith on First Take and made a memorable moment of his own. The NFL veteran tore into co-host Chris “Mad Dog” Russo over Russo’s questioning of why NBA stars could force trades.

But Smith is undoubtedly the star of the show and a ratings monster. In recent months, Smith has made headlines by disavowing the New York Knicks. He also got into a Twitter beef with Brooklyn Nets star Kyrie Irving, and he announced that he once thought about running for senate.

Now fans will have to deal with at least a few weeks of ESPN First Take without Smith. Though NBA fans are cracking up over the reasoning for Smith’s absence.

82-game season is too much! https://t.co/RuMtNyBqHC

man threw his shoulder out of place with all that reaching https://t.co/np96cLCLZd

Though others assumed that the gregarious host would just find another way to take part in the daily morning show.

Some are even reporting that Smith does not, in fact, have that dog in him.

In all seriousness, Smith’s absence is a huge loss for the network. He’s one of sports television’s most compelling figures, for better or worse. Though regular co-host JJ Redick may appreciate a short respite from Smith’s incessant yelling.