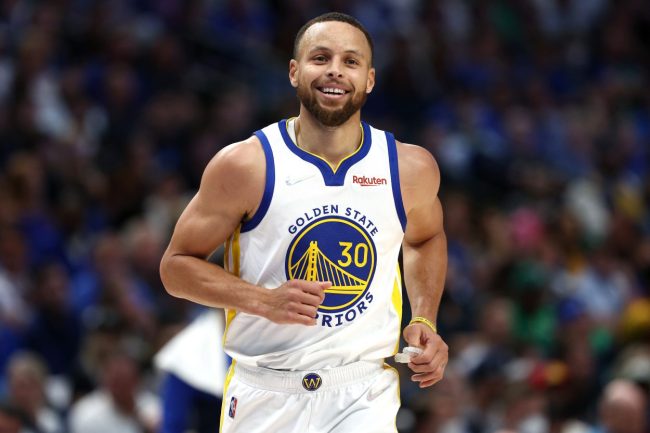 Despite a looming potential breakup with Draymond Green that could end the Warriors’ dynasty, things are pretty good for Golden State superstar Steph Curry these days.

Curry won his fourth NBA Championship with the Dubs back in June and his first NBA Finals MVP, solidifying his place in the game’s history. ESPN NBA analyst Bobby Marks even called Curry the second-greatest player in league history.

He then went on to steal the show as the host of the ESPY Awards, and now Curry is kicking back enjoying his offseason by trying a whole new sport.

Curry took the short trip across the bay to the Oakland Coliseum to take batting practice with the Oakland Athletics ahead of their game with the Houston Astros. Though A’s manager Mark Kotsay wasn’t a fan of Curry’s tardiness.

Kotsay is fining Steph for being late to warm-ups and won’t put him in today’s lineup 😂 pic.twitter.com/Hi3ky94AiU

The Athletics currently sport the second-worst record in baseball and the league’s second-low payroll. So Curry was unsurprisingly the star of the show.

Even Astros manager Dusty Baker had to get in on the fun.

When Curry eventually stepped into the cage for batting practice, it was clear that he was a natural. Between the backwards hat, stance and swing, it’s clear Curry grew up a Ken Griffey Jr. fan.

The BP session went so well that by the end of it, Kotsay didn’t seem to care about Curry showing up late anymore.

Looks like Kotsay has a new right-handed bat in his lineup 😂 pic.twitter.com/iTijYAjST3

And in case you thought he could on DH, Curry was ready to show off what he can do with the glove as well.

Steph was ready to take the field 😂 pic.twitter.com/362OPju2sJ

Curry’s superstar status transcends the game of basketball. So much so that Houston Astros players lined up to greet him like kids lining up for a mall Santa Claus.

Astros players were lined up to meet Steph 🐐 pic.twitter.com/eiQuRMFs65

If the Warriors do blow things up, maybe we have another Michael Jordan-Chicago White Sox situation on our hands? We can only hope.