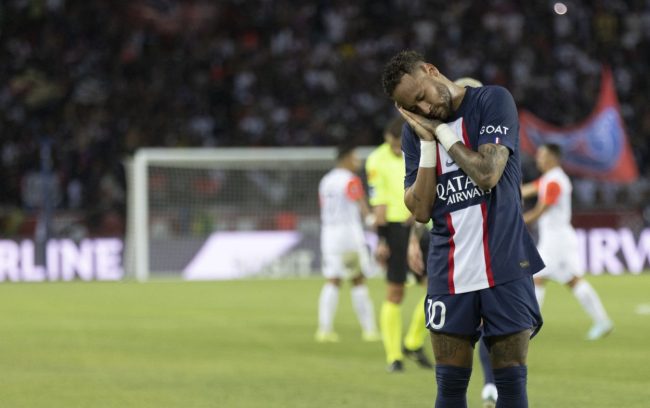 Steph Curry’s 2022 NBA Finals performance was the stuff of legend. The finals MVP averaged 31.2 points, 6 rebounds and 5 assists in the Golden State Warriors’ victory over the Boston Celtics. But perhaps his most lasting contribution, at least culturally speaking, was the iconic celebration he introduced to the world.

With just over three minutes remaining in Game 6 of the NBA Finals and Golden State up 93-81, Curry drilled a three to all but end the game and the series. He responded with what has been called “night, night” celebration after putting the game to bed.

The celebration quickly became iconic and it has spread across the world through various sports. Sabrina Ionescu dropped it in the WNBA. Former National League MVP Andrew McCutchen broke it out in the MLB. The celebration even found its way to the USFL.

But the latest superstar to pay homage to Curry is taking it global.

Brazilian soccer player Neymar is one of the best and most-exciting players on the planet. He’s one-third of Paris Saint-Germain’s incredible attacking trio alongside Lionel Messi and Kylian MBappe.

Neymar scored twice in PSG’s 5-2 victory over Montpellier in Saturday’s French Ligue 1 contest. After his second goal, a wonderful diving header to make the score 3-0, he had just one celebration in mind.

Curry caught a glimpse of the celebration on Twitter and immediately had to shout out his fellow superstar.

To which Neymar gave the respect right back.

Neymar now has three goals in two games as PSG look for another Ligue 1 title and its first UEFA Champions League trophy.

Meanwhile, Steph appears to be loving life in the offseason as the Warriors prepare to defend their crown.