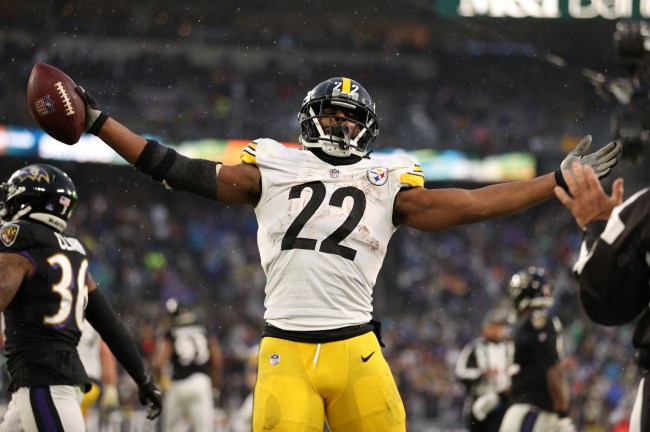 The Pittsburgh Steelers are undergoing a ton of changes heading into the 2022 season. Ben Roethlisberger is retired, and JuJu Smith-Schuster headed to the Kansas City Chiefs.

Kenny Pickett and Mitch Trubisky will battle for the QB1 spot, and the offense will look much different. But, running back Najee Harris should once again be a workhorse. After all, that’s why Pittsburgh drafted him out of Alabama.

The Steelers running back showed up to offseason activities, ready to roll with a new physique. Fresh off his rookie season, Harris is again prepared to shoulder the load. The former Crimson Tide star even said he doesn’t care if he gets 500 carries — he just wants to win (h/t Jonathan Heitritter of Steelers Depot)

“I can get 500, god damnit. I didn’t have an issue with it. It was the media who had an issue with it. I told them every game, I was like,‘Man look, if this is the way we’re winning, I can carry the load.’ I trained to carry loads. I mean, it’s not something that I haven’t done before. I did it in college, high school.”

Harris was on The Rich Eisen Show and spoke about the upcoming season. This is a terrific mentality, although the Steelers might want to be careful not to overwork their young star.

Najee Harris Got A Ton Of Work In His Rookie Year

In his rookie season, Harris racked up 1,200 with seven touchdowns on 307 carries and added 74 catches for 467 yards and three touchdowns in the passing game.

The likelihood of Harris getting 500 carries this upcoming season looks bleak, but you never know. With Pickett and Trubisky running the show, perhaps the Steelers elect to run the ball a lot more.

Either way, Harris should be in line for some of the top numbers in the NFL, especially if his workload is close to what it was in 2021.