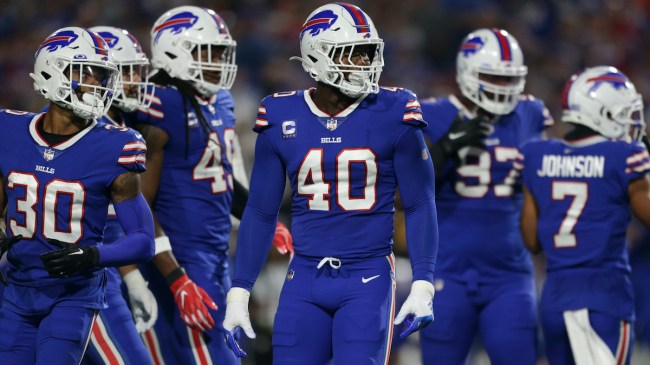 The Buffalo Bills have one of the best defenses in the NFL this season and that’s in part to the addition of two-time Super Bowl champion Von Miller.

After winning Super Bowl LVI with the Los Angeles Rams, Miller shockingly joined the Bills on a six-year, 120 million contract and it’s off to a good start. He recorded two sacks in their season opener against the Rams and the Bills’ defense ranks No. 1 in yards allowed per game after Week 4.

Ahead of the Bills’ Week 5 matchup against the Steelers on Sunday, Pittsburgh head coach Mike Tomlin was asked about Miller’s impact during his Tuesday press conference. He had high praise for the talented pass rusher and gave a hilarious quote, claiming Miller is just not from our planet.

Mike Tomlin: "He's Von Miller. Some guys are just aliens visiting from another planet. He needs no endorsement from me. Kudos to Von Miller. We talk about his talents often, but this guy's a scientist. He works at his craft. He encourages others to do that like him." #Steelers

Tomlin praises Miller’s work ethic in a way only he could and it’s well deserved. The Super Bowl 50 MVP has always been a game-changer.

Even in his 11th season, Miller has remained a problem for NFL offenses. Through the first 4 games, he has 7 solo tackles and 3 sacks.

“Man, in the National Football league, you’ve got to respect all these guys — they’re all freaky. But some guys are even freaky in our setting. And he’s just one of those guys. He always has been since he came out of [Texas] A&M, moving changing and running like a corner.”

Tomlin went on to mention his time coaching Miller at the 2018 Pro Bowl and even credits him for the extra cash pocketed from their win.

“I know we don’t spend a lot of time talking about the outcomes of Pro Bowl games, but Von Miller took over that Pro Bowl game and gave us all quality checks, man. And we appreciate his efforts.”

The Steelers have a difficult task ahead of them after losing 24-20 to the New York Jets in Week 4. Tomlin named rookie Kenny Pickett as the starter for this week in hopes of providing a much-needed spark.

It won’t be easy though against Von Miller and the Bills’ defense.