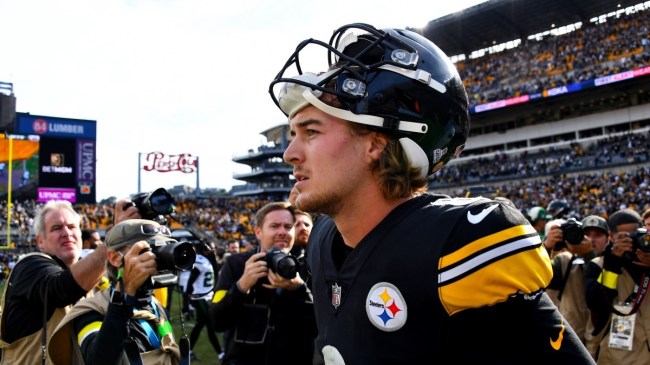 Pittsburgh Steelers fans are a very proud bunch. And why shouldn’t be? The six-time Super Bowl-winning franchise is one of the most consistent franchises in the league. Mike Tomlin is in his sixteenth season as coach and has yet to have a losing season.

But, they’ve started slow this year with Mitch Trubisky under center, as they sit at 1-3 with a brutal schedule coming up. But, they got some good news about their quarterback situation, especially if they wanted Trubisky benched.

The Steelers are expected to start rookie Kenny Pickett at Quarterback

According to reports, Pittsburgh is going to go with rookie Kenny Pickett at quarterback. Pickett played the 2nd half in their loss to the Jets in week 4, and went 10-13 for 120 yards and three interceptions. He scored twice on runs, though.

Kenny Pickett is expected to take the starting job from Mitch Trubisky going forward, per @RapSheet

Pickett is familiar to Yinzers, as he starred at Pitt last year after being mediocre there for four years. Pickett threw for over 4300 yards and 42 touchdowns for the ACC champions Pitt Panthers last year. He finished 3rd in the Heisman voting and was taken 17th overall by the Steelers in the 2022 draft.

I’m not a Kenny Pickett fan, but most Steelers fans are.

They are going to learn to hate him in Cleveland, Baltimore and Cincinnati.

I’m from Pennsylvania and grew up around Steeler fans. Trust me, they’re the biggest sunshine pumpers in the entire world. No fan base will try to convince you stepping in a puddle is actually good like they will.

That is infectious. His leadership qualities are perfect for this young team. It’s a lot more fun for everyone when your leader is having a good time.

Look at these people. He came in, threw two bad picks plus one on a hail mary, one of them giving the Jets a chance to take the lead, and all of a sudden he’s John Elway.

You know when you know. You know instantly when you see it. Kenny Pickett has IT. He will have a tough year, probably throw 13-14 picks but kid is insanely accurate and very athletic. The Steelers are a bad team and will have a bad record but they have the guy to win 7th SB.

The Steelers will travel to the Bills on Sunday.