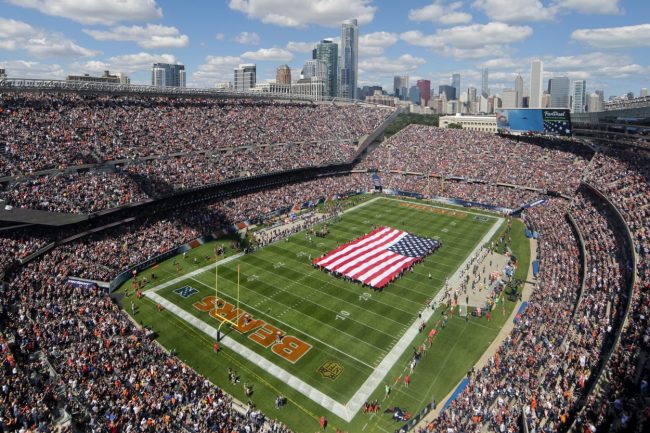 The Chicago Bears may well be on their way out of Chicago’s city limits and, in turn, out of historic Soldier Field. The 61,500 capacity stadium is by far the oldest in the NFL, having opened in 1924. It’s also the smallest in the NFL, nearly 2,000 seats smaller than University of Phoenix Stadium in Arizona.

Those are just two of the reasons the team is looking to move to the Arlington Heights suburb of Chicago despite pushback from the city, which is doing everything it can to keep the team.

The city has previously proposed major renovations to the stadium and its surrounding area, but those were met with less than stellar opinions from fans and those around the team.

Now, in a last-ditch effort, Chicago Mayor Lori Lightfoot has come up with an insane plan to keep the Bears in the city.

JUST IN: Mayor Lori Lightfoot offered Monday to put a dome on Soldier Field, at a potential cost of $2.2 billion, in a desperate attempt to keep the Bears in Chicago or save face if they leave for Arlington Heights. https://t.co/qsJRpXfqZ0

The Chicago Sun Times is reporting that Lightfoot wants to spend $2.2 billion of public money to put a dome on the stadium. The paper also reports that part of the project would be funded by selling naming rights to Soldier Field, yet retaining the “Solider” part of the name that indicates it’s a war memorial.

🧵It will also make Soldier Field a top-tier NFL stadium with tremendous opportunity for the Bears to fulfill their vision. pic.twitter.com/axdy9PeyNg

“We are making a compelling case for the Bears to stay in Chicago,” Lightfoot said. They want a Tier One stadium to maximize revenues and we agree.”

Adding a dome solves issues regarding weather, but noy the stadium’s capacity. Lightfoot also produced two other options. The first was a new stadium without a dome. The second, a renovation of the historic stadium.

Fans aren’t sold on any of the proposed ideas, particularly with the dome.

Any further renovations to Soldier Field and it’s no longer historic Soldier Field. I love the history of it as much as any Chicagoan, but the only renovation left for the purpose of an NFL stadium is a wrecking ball. https://t.co/KoXv34Og14

as @VeryDumbIdiot pointed out to me, they should just buy the team if they are doing this https://t.co/5ZpUBx2vBE pic.twitter.com/UmNsx7wGSa

You can’t be serious https://t.co/D3UPe0rS2K

Is putting a dome on Soldier Field supposed to be viewed as a *good* thing? https://t.co/ebykYgCDpQ

the bears playing indoors would be a catastrophe https://t.co/AMPQjyiN34

The Chicago Bears appear to be leaving the city, whether Lightfoot likes or not.