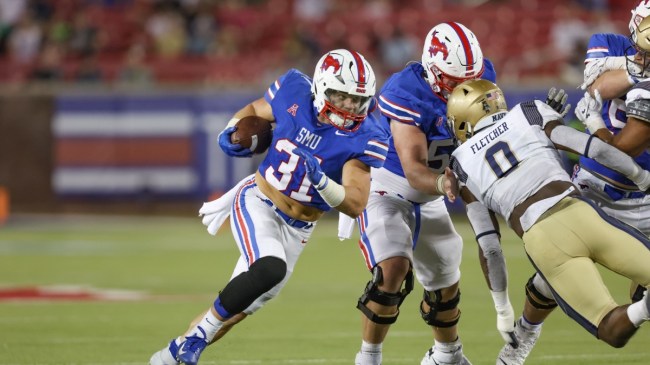 Sports gambling is a risky proposition. After all, it is gambling. But, there are few thrills like betting on a team and winning said bet. You feel like the smartest person in the world. But, with that comes the games you lose, and worse, the bets you feel like you should’ve won and didn’t.

Those bets, known as bad beats, often go viral. And, tonight’s SMU-Navy game certainly qualifies if you bet on SMU.

The Mustangs of Southern Methodist University were in control of their game against Navy from the start. They jumped out to an early 13-0 lead and led 40-20 midway through the fourth quarter, more or less sealing the game for SMU bettors against a Navy offense not known for passing the ball.

But, Navy got a quick three-and-out and two long pass plays got them down near the Mustang goal line. There, a catastrophe happened for Mustang spread bettors.

WHAT A BACKDOOR COVER FOR NAVY +12.5 BETTORS pic.twitter.com/oO0wv8Sauc

Oh no. What a terrible beat.

That came after Navy did this to cover the first-half spread of 7.5

What a play from the Midshipmen pic.twitter.com/CpnJtiLdXx

This bettor lost a staggering sum on SMU. I hope he’s having a good night.

Navy THROWS the ball. Scores with NINE SECONDS LEFT for an awful backdoor that burns this guy for a $190,000 loss. pic.twitter.com/AYkvD1JaQg

Then again, the SMU mustang pooping on the field had to have been a sign something was going to go wrong.

I’ve reached a point in my life where I get the video of SMU’s horse pooping sent to me. #PonyUp pic.twitter.com/hmIaMlN8PI