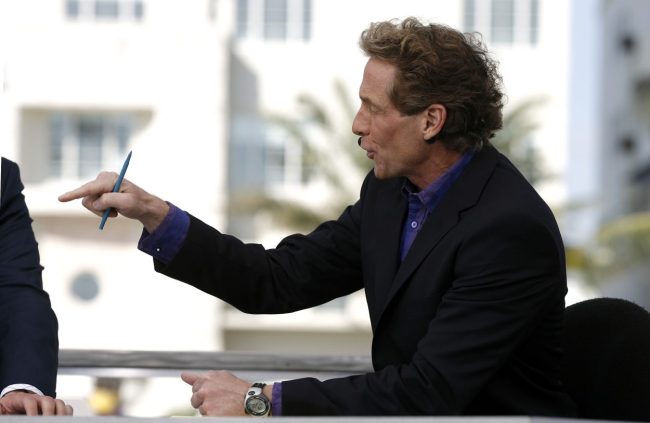 LeBron James couldn’t help but to celebrate when his son Bronny threw down an absolutely disgusting fast-break dunk on national television on Monday. Bronny is one of the top high school prospects in the country and was playing alongside his younger brother, Bryce, on a travel team of elite California players. It was the second time the two have played a competitive game together, with the first coming just days prior.

The internet quickly exploded with highlights of the James dunk. But one person in particular wasn’t wowed by the athletic feat. We’ll give you one guess as to who…

BRONNY JAMES THROWS IT DOWN 🔥 pic.twitter.com/ikJ8ksPVSx

Hey, Bronny … impressive. But your dad would've dunked it left-handed. You sure got away with it, though.

Heat between Bayless and LeBron is nothing new. The controversial TV personality took shots at the idea of LeBron and Bronny playing on the same NBA team earlier this year. But it is the first time that Bayless came after Bronny, a rising senior in high school, directly. The tweet didn’t sit well with many on basketball Twitter.

ain't no way you're hating on a high schooler pic.twitter.com/nveQkCLUzN

Skip Bayless praying on the downfall of a high schooler because he has beef with his dad is nuts.

The backlash seemed to rattle the often unflappable Bayless. He appeared to walk the comments back Tuesday morning on Fox Sports 1’s morning show “Undisputed”

“I wasn’t criticizing Bronny, I was merely commenting on a young man who is clearly going to be a focal point for this show and everybody else from this point forward.”

“It shocked me last night when my tweet exploded,” he said. “Because I wasn’t criticizing Bronny. I was merely commenting on a young man who is going to be a focal point for this show and for everybody else from this point forward…”

Skip is unbelievably corny… there really is no level he won't stoop to for https://t.co/8pvnisQsxW

With Stephen A. Smith making his grand return to ESPN, it’s not surprise that Bayless tried to make a splash of his own.

But if this was his plan, it backfired in spectacular fashion