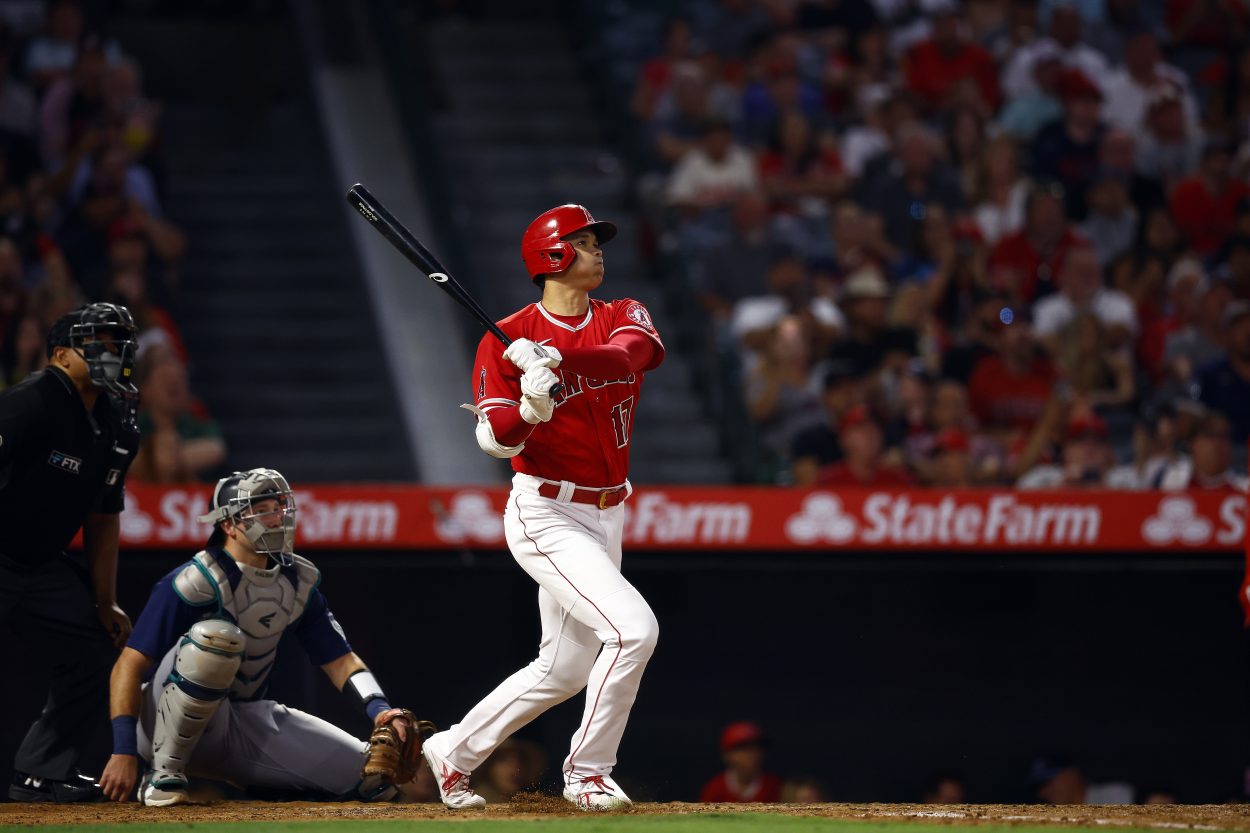 Shohei Ohtani is ridiculous. By now, everyone seems to have figured that out.

Ohtani put the baseball world on notice last year when he put up absurd numbers both at the plate and on the mound. Now he’s back doing it again in 2022.

The Japanese import is have a better pitching season this year than he had last year, and while his hitting numbers having been as insane this time around, they’re still at an All-Star level.

Ohtani displayed just how dangerous he is at the dish Saturday night against the Seattle Mariners. In the bottom of the third inning with his team down 1-0, he did this…

The absolute tape measure shot came out for 462 feet, the second-longest of his career behind the 470-foot bomb he hit against the Royals in 2021. The gargantuan dinger came off Ohtani’s bat at 118 miles per hour, the hardest-hit ball in his career.

Baseball fans were in absolute awe of the blast, and of Ohtani in general.

WE ARE SO LUCKY TO WITNESS SHOHEI OHTANI

a daily reminder that this man, shohei ohtani, is a ✨pitcher✨ by trade 😳pic.twitter.com/rb2q47bxfD

At this point, just assume anything that Shohei Ohtani does, nobody has ever done it before.

Shohei Ohtani has been treating the MLB like Danny Almonte treated the LLWS. That’s the only historical precedent we’ve seen with our own eyes. A 14-year old gassing up a bunch of 11 & 12-year olds.

Update: Shohei Ohtani now has a June slugging percentage of .704 during his MLB career and that's higher than anyone with more than 70 June plate appearances in the last 80 years.

Oh, and he’s recently done this as well.

HE DID IT!! A CAREER HIGH 13 STRIKEOUTS THROUGH 8 SCORELESS INNINGS FOR SHOHEI OHTANI!!

The Angels lost the game to the Mariners, 5-3. Los Angeles has perhaps the two best players in baseball and continues to find ways to lose. The ongoing jokes write themselves.

“Shohei Ohtani hits another monster league leading homerun and Mike trout ups his average to .573 as the angels lose 9-2” is basically almost every angels headline 😂

Every time I hear about an Angels game: Trout is incredible, Ohtani broke some 50 year old record, and the Angels lose 8-2.

I swear every LA Angels stat has some stupid amount of runs from Mike Trout, and Shohei Ohtani breaking some record that hasn’t been broken since the 70’s. Then they still lose by 6…

Either way, we may have to find a new word to describe Ohtani because “unicorn” and “alien” no longer cut it.