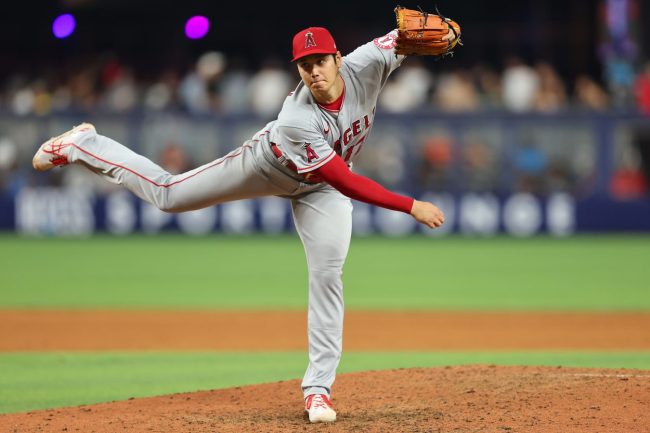 Whether he’s hitting absolute bombs at the plate or striking out batters with absolutely disgusting stuff on the mound, Ohtani is truly a one-of-a-kind player. So much so that he’s breaking some sort of record almost every day.

He did so again on Wednesday night against the Miami Marlins. Ohtani dominated the fish, striking out 10 on the mound and allowing zero earned runs. He also knocked in a pair of runs and stole a base as a hitter.

Ohtani became the first player in Major League Baseball history (*at least since stats were officially recorded) to strikeout 10, knock in two and steal a base.

Shohei Ohtani is the 1st player since RBI became official (1920) with 10+ strikeouts, multiple RBI & a SB in a game

5 have had ALMOST that combo with ONE RBI instead:

He’s also been on an absolutely unreal pitching run of late.

Ohtani now has a dazzling 2.44 ERA, which ranks fifth in the American League. He’s also now on pace for 36 home runs and a career-high 106 RBI. Baseball fans are starting to run out of ways to say how ridiculous Ohtani is.

Incredible. The AP Stylebook should require superlatives with any reference to Shohei Ohtani. https://t.co/bjInIxRBEZ

The best baseball player of all time. https://t.co/LZ3HZFFNta

Shohei the greatest you ever seen.

Remember that. All that Babe Ruth shit dead. https://t.co/QYwZZS8AvH

My 10 year old ballplayer asks: "How is someone supposed to hit that?".

My answer: they're not. https://t.co/F0pRxlxsV1

Shohei Ohtani might start the All-Star game at DH and pitcher. He also has 3 consecutive starts with 0 ER and 10K.

Shohei Ohtani is not an alien. But he is something that we likely won’t see again for a very, very long time. Baseball fans may not realize quite how ridiculous he is due playing for a bad team on the West Coast. But Ohtani is already one of the game’s all-time great players.